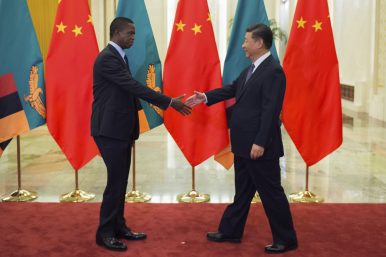 Zambia’s President Edgar Lungu, left, shake hands with China’s President Xi Jinping, prior to their bilateral meeting at the Great Hall of the People, in Beijing, China, on Sept. 1, 2018 ahead of the Forum on China-Africa Cooperation.  Image Credit: Nicolas Asfouri/Pool Photo via AP

Zambia is a country of contrasts. A majority of its 17 million people live in poverty, yet according to the CIA’s World Factbook, Zambia had “one of the world’s fastest growing economies for the ten years up to 2014, with real GDP growth averaging roughly 6.7 percent per annum.” And alongside crisis-level degrees of HIV and AIDS, high infant mortality rates, and shockingly low life expectancy, Zambia has nonetheless enjoyed relative political stability since it gained independence from Britain in 1964. That alone makes Zambia stand out among African nations.

Zambia is also one of China’s oldest diplomatic partners in Africa. Zambia recognized the People’s Republic of China just five days after gaining its own independence.

Crucially, Zambia is rich in key resources, in particular copper, which has made it a target for mining interests from the days of European colonialists until the present. Many now claim that China is Zambia’s newest colonialist power, leading the nation into a stranglehold of debt from which it can never recover.

Importantly, it is not just foreign media and international governments and institutions crying foul. Voices within Zambia are raising the alarm, as well.

Writing in the Lusaka Times in July 2018, Kalima Nkonde says that “it is apparent that there is…subtle and informal colonization of the Zambian economy taking place.”

“Unlike formal colonialization” at the hands of “European imperialist bandits” in the 19th century, he writes, “China is doing it informally and deceptively.”

Nkonde cites a myriad of problems with the Zambia-China relationship, at both the state level as well as the interactions between ordinary Zambian citizens and the tens of thousands of Chinese who can now be found in Zambia, doing everything from selling chickens to running low-wage, often unsafe, factories and mining operations.

He identifies China as a major corrupting influence and peddler in Zambian politics, a view shared by others who have worked in the country in election monitoring.

“The Chinese choose their candidates and support them in any way necessary,” said one South African familiar with technologically safeguarding the election process in Zambia and other African nations.

In the Zambian Observer, Daimone Siulapwa observed this past December that 19 infrastructure projects have been built in Zambia in the preceding five years, all with loans from China that add up to over $9 billion.

Siulapwa cites four areas in which he feels China is exploiting not only Zambia’s economy, but also its legal and state structures, with consequences for Zambia for decades to come.

First, infrastructure. Like European colonialists before them, the Chinese are building infrastructure to support their primary aim of extracting and exporting Zambia’s rich mineral resources, particularly from the Copperbelt region.

Second, “small-scale” Chinese entrepreneurs. The local economy is being undermined, and Zambian nationals displaced, by Chinese entrepreneurs who, by the thousands, are allowed unfettered immigration into Zambia. These immigrants establish trading companies and dominate local markets, monopolizing parts of the economy that should be left for domestic business owners and small family enterprises.

Third, property purchases. Uncontrolled Chinese immigration is also bringing a wave of property and farm purchases that give buyers a foothold in Zambia for generations to come.

Fourth, illegal activities. Chinese nationals have been arrested for unlicensed mining and smelting activities, and the use of children in the labor force.

Many of these same concerns have been raised by scholars, journalists, and politicians in other African countries with a robust Chinese presence.

Siulapwa defines Zambia’s position with China as no longer a “partnership”, but “economic slavery.”

The root of the problem, he says, is “the way our leaders are negotiating these deals with China.” He states that “huge” kickbacks” are the motivation, and that Zambia’s “strategic assets” have been given over to Chinese control for as much as 30 years.

For some Zambians, one of the most egregious indicators of China’s influence in Zambia occurred in December 2017, when the Zambian government commissioned eight Chinese nationals into the Zambian police force. The incident provoked a national outcry, resulting in a reversal of the appointments. The damage to the Zambian government’s prestige had been done, however; for many, this incident was proof positive that Zambian leadership has been compromised by the Chinese government.

Allegations of corruption within the Zambian government are not limited to those relating directly to China.

In September 2018, the United Kingdom, the Republic of Ireland, Finland, and Sweden suspended aid to Zambia, after the Zambian government acknowledged that over $4 million had “gone missing.” The missing aid money, specifically designated for Zambia’s poor, seemed to bolster corruption allegations tied to President Edgar Lungu’s government.

China, for its part, refutes any allegations of impropriety in Zambia by claiming that, on the contrary, it is Chinese citizens who are being victimized in Zambia.

Reports late last year that China had bought Zambian state enterprises led to an official complaint from the Chinese government that Chinese nationals were being targeted for xenophobic attacks in Zambia.

And Chinese President Xi Jinping himself has categorically stated that Chinese investments in Africa as a whole have “no strings attached.”

In Zambia, however, not only leading voices but ordinary citizens themselves seem to be taking an alternative view to the official Chinese line.

They deserve to be heard. If Chinese investment is good for Zambia, then it should be able to withstand scrutiny. But if, in fact, China’s investments represent a mortal risk for Zambia, then ordinary Zambians are brave to challenge it. It is not easy to look a gift horse in the mouth, particularly when the gift is sorely needed.

Ethiopia has tripled the size of its main airport