U.S. Commander Says China Tried to Sneak Into American Military Base in Africa

The U.S. military in Africa has accused China of “irresponsible actions” for allegedly harassing troops at an American base in Djibouti.

According to Rear Admiral Heidi Berg, the director of intelligence at the U.S. Africa Command (AFRICOM), forces stationed at a nearby Chinese base have been interfering with American operations at the Camp Lemonnier base on the Horn of Africa.

The rear admiral said China had tried to “constrain international airspace” by blocking aircraft from flying over the Chinese military base to the west of the American facility, fired lasers at American pilots and flown drones to interfere with U.S. flight missions.

Berg even accused China of “intrusion activity” around the U.S. base, and specified “attempts to gain access to Camp Lemonnier.”

An AFRICOM spokesperson later told the Times that the U.S. “takes appropriate measures to ensure the force protection of its personnel and assets” and works with Djibouti authorities “to deconflict airspace, as well as prevent other incidents that infringe on force protect and that can potentially compromise operation.”

The two camps have difficult relations, and the U.S. has spoken out over the behavior of their Chinese neighbors before. Last year, for example, the Pentagon sent a formal complaint to Beijing after two airmen suffered minor injuries when targeted by Chinese lasers.

China has also complained about the U.S., claiming that low-flying American aircraft have been conducting spy missions near the Chinese facility. The small but strategically located East African nation is busy with international troops, hosting facilities operated by France, Japan, Germany, Spain and Italy.

Camp Lemonnier opened in 2001 and is home to around 4,000 troops. The base has become a key staging point for U.S. counter-terrorism operations in the region, and was a hub for drone missions before the aircraft were relocated due to safety concerns. Originally 88 acres, the U.S. signed an agreement with the Djibouti government in 2006 to expand the facility to 500 acres.

The Chinese base is more recent, with work beginning there in 2016. The 90-acre facility opened in 2017 and was designed as a resupply hub for ships partaking in regional peacekeeping and humanitarian missions. It is believed that around 1,000 troops are stationed at the base.

Beijing has dismissed the most recent American allegations. “The Chinese side has consistently abided by international law and the laws of the host country, and is committed to safeguarding regional security and stability,” Foreign Ministry spokesperson Lu Kang said at a press conference on Monday, Global Times reported. 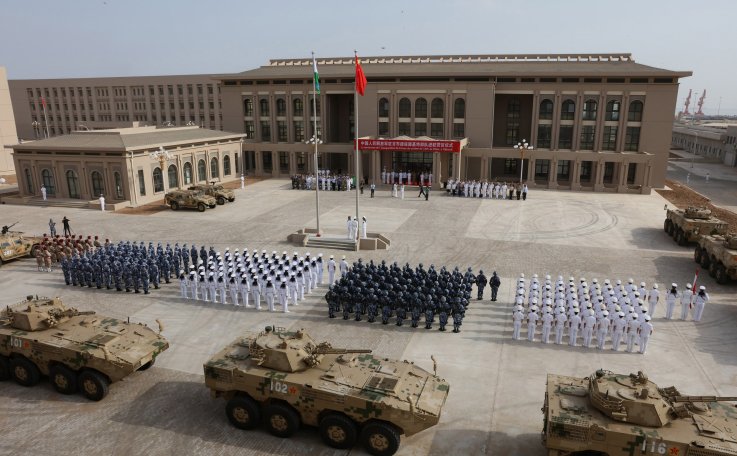