The world’s most corrupt countries revealed: Somalia is named as the worst, with Denmark considered the fairest… while experts warn the US is ‘one to watch’

Somalia is the most corrupt country in the world, Denmark the least, while America’s falling score is a ‘red flag’, according to a global corruption watchdog.

Transparency International highlighted Hungary and the United States in their Corruption Perceptions Index for 2018, with America being knocked from the top 20 ‘cleanest’ list.

Trump’s America lost four points and dropped out of the top 20 least corrupt nations for the first time since 2011, while Hungary’s politics has taken on more autocratic overtones, according to the researchers.

‘A four point drop in the CPI score is a red flag and comes at a time when the US is experiencing threats to its system of checks and balance, as well as an erosion of ethical norms at the highest levels of power,’ the Berlin-based organization said. 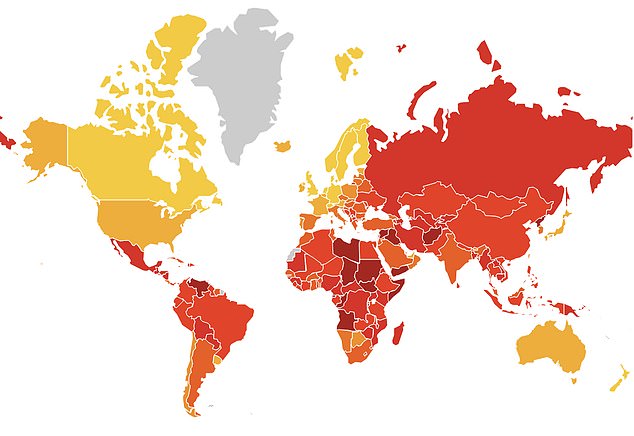 A map showing the most corrupt countries in red and the ‘cleanest’ countries in yellow, Europe is the best continental region, while Africa is mired in corruption at the top levels of government 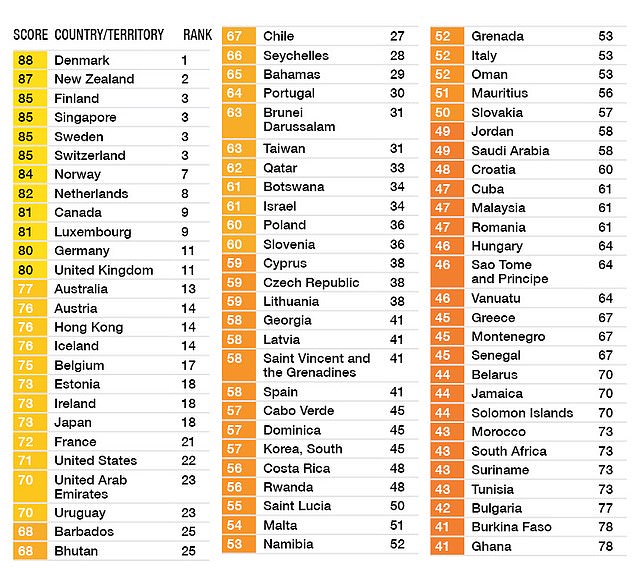 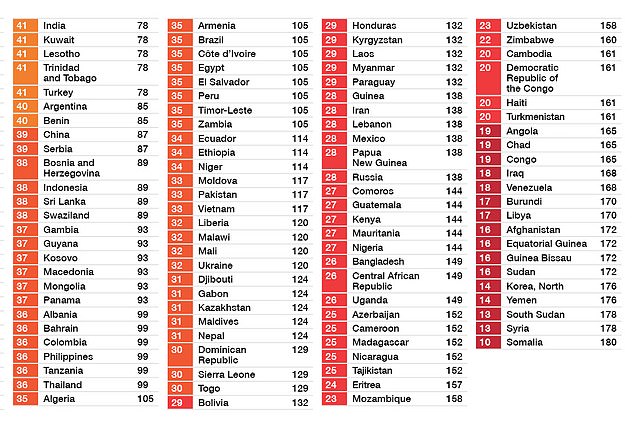 Their list shows Denmark at the top with Somalia placing at the bottom, the data is based on data from the World Bank and World Economic Forum among other institutions 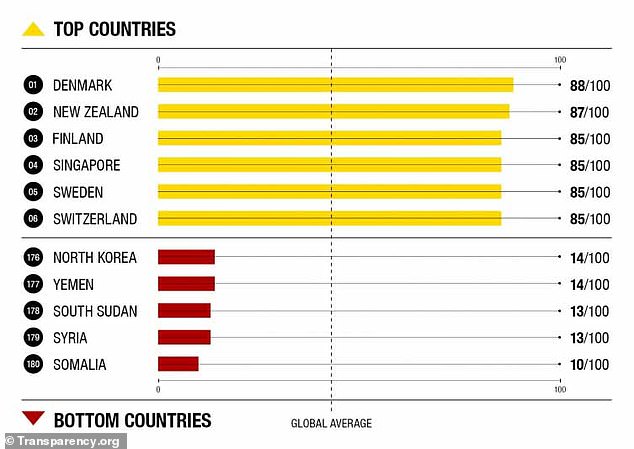 The top five countries in each category can be seen above, with Denmark leading the ‘cleanest’ nations and Somalia falling bottom of the list along with other infamous countries

‘If this trend continues, it would indicate a serious corruption problem in a country that has taken a lead on the issue globally -this is a bipartisan issue that requires a bipartisan solution.’

Zoe Reiter, the watchdog’s acting representative to the US, said they had serious concerns over the Trump administration but that corrupution had been a mounting problem for years.

‘Conflict of interest wasn’t a new problem, but it was illuminated in its glory when you have someone who is basically breaking norms.

‘Trump is a symptom not a cause. His presidency is illuminating some of the problems.’

The US, Hungary and Brazil were all listed as countries to watch. 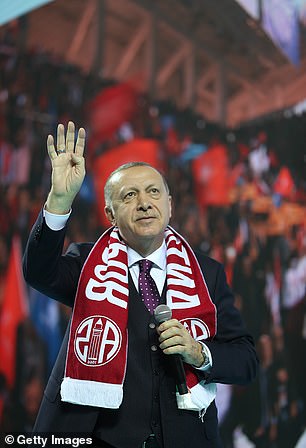 The most improved were Estonia, Ivory Coast, Senegal and Guyana; and decliners included Australia, Chile, Malta and Mexico.

Somalia was rated the most corrupt with a score of 10, followed by Syria, South Sudan, Yemen, North Korea, Sudan, Guinea Bissau, Equatorial Guinea, Afghanistan and Libya.

Many of the most corrupt regions are in throws of warfare which has ravaged government and any prospect of democracy.

The Corruption Perceptions Index showed more than two-thirds of countries scoring below 50, on its scale where 100 is very clean and zero is very corrupt.

In a cross-analysis of its survey with global democracy data, Transparency said a link could be drawn between corruption and the health of a democracy.

Full democracies scored an average of 75 on the corruption index, flawed democracies averaged 49, and autocratic regimes averaged 30, the organization said.

The US score dropped from 75 to a below average 71.

It noted that Hungary dropped eight points and Turkey nine over the past five years, to scores of 46 and 41, respectively. 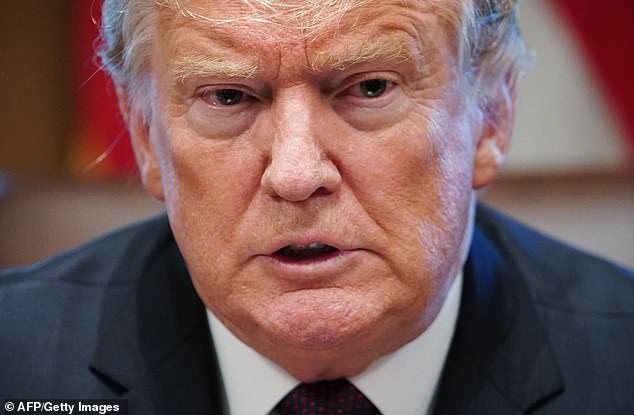 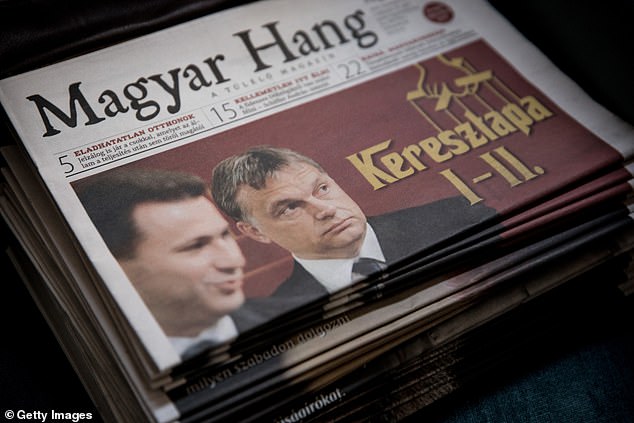 Viktor Orban is pictured on the front of the new Magyar Hang newspaper, created by Hungarian journalists to combat Orban’s crackdown on the press and printed across the border in Slovakia

At the same time, the report cited Freedom House’s annual democracy survey, noting Turkey was downgraded from ‘partly free’ to ‘not free,’ while Hungary registered its lowest score for political rights since the fall of communism in 1989.

The ratings reflect the ‘deterioration of rule of law and democratic institutions, as well as a rapidly shrinking space for civil society and independent media,’ the organization said.

‘Our research makes a clear link between having a healthy democracy and successfully fighting public sector corruption,’ said Delia Ferreira Rubio, the head of Transparency.

‘Corruption is much more likely to flourish where democratic foundations are weak and, as we have seen in many countries, where undemocratic and populist politicians can use it to their advantage.’

Overall, Denmark led the survey as the least corrupt nation, with a score of 88, followed by New Zealand, Finland, Singapore, Sweden and Switzerland.

Rounding out the top group were Norway, Netherlands, Canada, Luxembourg, Germany and Britain.

Since 2012, only 20 nations had significantly improved their scores, including Argentina and Ivory Coast, which scored 40 and 35 respectively, up from 35 and 29. 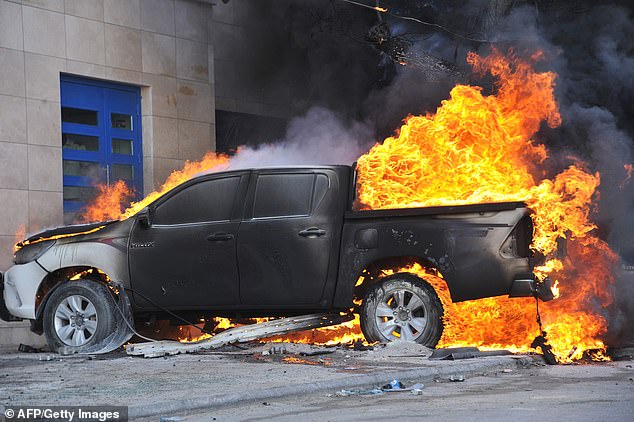 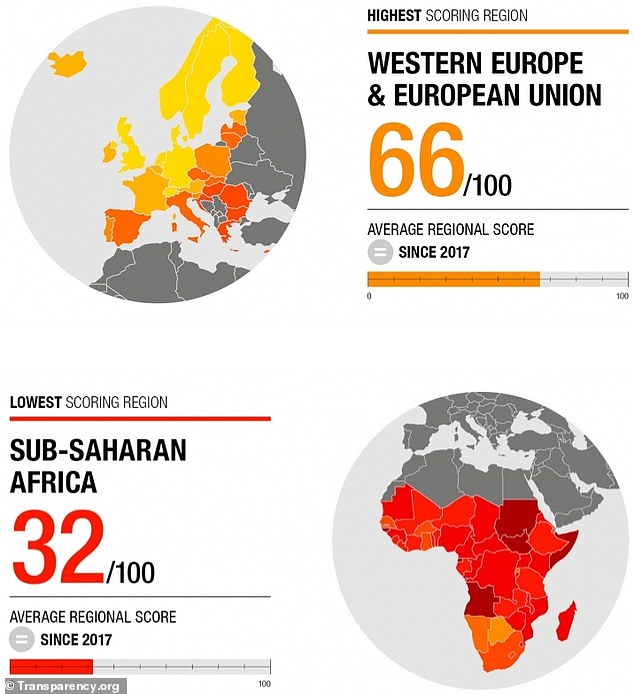 At the same time, 16 have declined significantly in that time, including Australia, which slipped from a score of 85 to 77, and Chile, which dropped from 72 to 67.

Progress Finally Being Made on a Single African Passport