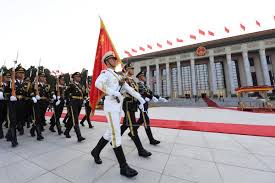 China recently released its latest White Paper on National Defence which evokes much concern in India’s security bureaucracy. The Indian Navy Chief has made a public pronouncement in response to the White Papergiven the maritime dimensions to India-China relations. He said that we will have to watch China carefully.

The document indicates plans to establish foreign military bases to protect its overseas investments and also cope with emerging challenges in the international political system. From a Sino-centric world view, to quote from the document: “Regional hotspots and disputes are yet to be resolved. Despite positive progress, the Korean Peninsula still faces uncertainty. South Asia is generally stable while conflicts between India and Pakistan flare up from time to time. Political reconciliation and reconstruction in Afghanistan is making progress in the face of difficulties. Problems still exist among regional countries, including disputes over territorial and maritime rights and interests, as well as discord for ethnic and religious reasons. Security hotspots rise from time to time in the region”.

In 2008, China to tackle these potential threats initially considered Djibouti as a prospective logistical base for its naval flotilla, to provide security escort vessels for Chinese shipping convoys sailing around the Horn of Africa and the Gulf of Aden. However, after 2013, when China started to make massive investments in infrastructure projects, which included a new port, two new airports, and the Ethiopia-Djibouti railway, it was a move to assert Beijing’s politico-military presence in the western Indian Ocean. In 2014, Beijing signed a Defence and Security Agreement with Djibouti, which already hosts military base facilities of the US, France, Italy and Japan. In August 2017, China started its first overseas People’s Liberation Army Navy base in Djibouti.

China forged ties with Djibouti to promote its commercial interests, the penetration of African and Central Asian markets. As the “One Belt, One Road” initiative gains traction, however, the focus also shifts to developing political influence in the Indian Ocean-rim states. Beijing needs the cooperation of the regional political elites to allow the People’s Liberation Army Navy access to critical Indian Ocean littorals to protect Chinese investments. Therefore a military base in Djibouti, situated at the Bab-elMandeb Strait, which separates the Gulf of Aden from the Red Sea and guards the approaches to the Suez Canal, proves a strategic asset.

Interestingly, India’s military relations with France, which includes a Mutual Logistics Support Agreement, enables Indian naval warships to now seek access to the French naval base in Djibouti to refuel for an operational turnaround to return to Indian shores. India, to support its naval missions across the Indian Ocean Region (IOR) and Indo-Pacific, also signed the Logistics Exchange Memorandum of Agreement with the US and is seeking similar such agreements with five more countries. This is how “third-world” countries like India through politico-military relations are also able to benefit from overseas military bases. India’s first foreign military airbase in Tajikistan, established in 2002, gives New Delhi the depth and range to play a larger role in the Subcontinent and Central Asia. India also has a 50 bed military hospital in Tajikistan. For India surface transport access to this facility is through the Chabahar port in Iran via Afghanistan.

In June 2018, after Cambodia refused Washington’s offer to renew a training facility and boat depot at the Ream Naval Base, that the Americans themselves had built, it sparked rumours that China wanted to establish a naval base in Cambodia. Considering China’s massive investments in Cambodia’s infrastructure, Beijing would like to leverage these moves to maintain a military presence in the country.

Thereafter, US Vice President Mike Pence wrote to Prime Minister Hun Sen to express concerns over a possible Chinese naval base in Cambodia. However, Hun Sen clearly stated that Cambodia’s constitution has no provision to accommodate foreign military baseson its soil. Accordingly, there were no plans to amend the constitution to house such foreign bases.

Another possibility is that China would select a country with a suitable location in some other geographic sub-regionto establish an overseas naval logistics base. From an Indo-centric security perspective, perhaps Pakistan may prove to be the next candidate country for China to establish an overseas base. The Pakistan Navy’s role has expanded since the operationalisation of the Gwadar Port and accelerated development of the China Pakistan Economic Corridor. Gwadar is a Chinese-built and almost Chinese-owned operation. China has a 40-year lease to operate this port and a Chinese state-owned company with military links is in charge of the project.

In the mid-1990s, China wooed poorer nations in the Indian Ocean littorals through military and economic assistance, as outright aid or at ‘friendship’ prices along with political support. The aim was to isolate India in the IOR, so Pakistan would be the fulcrum. Beijing’s ‘military base network in the Indian Ocean Region’ would include Bangladesh, Sri Lanka and Seychelles.

China has reportedly approached governments in locations as diverse as Timor-Leste, the Azores islands, Portugal, Walvis Bay, Namibia in the South Atlantic. Clearly this suggests a strategy to develop a global footprint to rival the US. China’s logic is that if the US could have 800 overseas bases in 80 countries, there is nothing wrong for Beijing to have the same. To that extent, China’s overseas bases would attempt to challenge US hegemony and re-align the international strategic environment.

The Chinese Navy’s plans to induct its third aircraft carrier into operational service on completion of sea trials is another step in this direction. An aircraft carrier is a miniature military base or “floating island” on the seas. Each aircraft carrier can carry and launch around 50 fighter aircraft in 30 minutes, which can pulverise some of the most defended airspaces with aerial bombardment. Also, aircraft carriers can launch cruise missiles and deploy around 900 troops for a beach landing, making them a potent weapon platform to project power far from its home base. Chinese military modernisation programmes like the third aircraft carrier therefore needs to be linked to its moves on the strategic chessboard like establishment of overseas military bases.

The writer is Professor of International Relations and Strategic Studies at the Christ Deemed to be University, Bengaluru