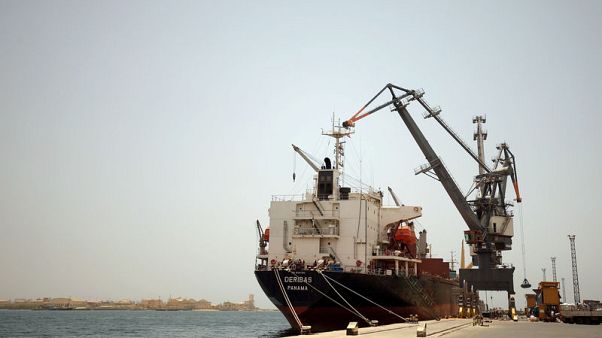 ADDIS ABABA (Reuters) – An Ethiopian ship docked in an Eritrean port for the first time in two decades on Wednesday and Eritrea announced plans to upgrade a road to its neighbour, local media said, in further signs of strengthening ties between the former foes.

Abiy and Isaias travelled the entire 70-km (40-mile) road that links Assab’s port along the Red Sea to the town of Bure just across the border in Ethiopia, which had not been used since a two-year war broke out between the neighbours in 1998.

“They were able to confirm that the existing road link was in good state,” state-run EriTV said.

“There are (now) plans to modernise the port in Assab and enlarge the road linking it to Bure to four lanes (from one),” it added.

Landlocked Ethiopia’s access to Assab and Eritrea’s other port in Massawa were cut off in 1998, forcing Addis Ababa to turn to Djibouti for sea access.

The country of 100 million has been almost entirely dependent on tiny neighbour Djibouti ever since, but Ethiopia has also negotiated a deal with Sudan to hold equity in its Port Sudan.

Earlier on Wednesday, an Ethiopian commercial ship docked in an Eritrean port for the first time since 1998, entering Massawa. State outlets said it planned to carry 11,000 tonnes of Eritrean zinc exports to China.

Abiy and Isaias were due to hold a summit with Somalia’s President Mohamed Abdullahi Farmaajo in Asmara on Thursday.

It was Abdullahi’s second visit to Eritrea since July 30 and the latest sign of thawing relations across the Horn of Africa following Eritrea’s rapprochement with Ethiopia.

Past Somali administrations had accused Eritrea of supplying weapons to anti-government Islamist insurgents. Asmara has repeatedly denied this, saying the accusations were concocted by Ethiopia.

In 2007, Eritrea walked out of the East African bloc IGAD in protest as Ethiopian forces entered Somalia to fight militants.