Saudi Arabia took the extraordinary measure of temporarily halting oil shipments via the Bab el-Mandeb Strait, a key shipping lane for crude at the southern tip of the Red Sea, after it said two tankers were attacked by Yemen’s Houthi militia.

The two vessels, each with a capacity of 2 million barrels of oil, belong to the Saudi National Shipping Co., Energy Minister Khalid al-Falih said in a statement posted online. One of the ships, the Arsan, was hit and suffered minor damage, according to the company. There were no injuries or spills as a result.

The Bab el-Mandeb Strait, off the shores of Yemen, Djibouti, and Eritrea, connects the Red Sea with the Arabian Sea and is one of the world’s major waterways for crude oil and other petroleum products. Even so, it’s significantly less crucial than the better-known Strait of Hormuz off the coast of Iran.

“In the interest of the safety of ships and their crews and to avoid the risk of oil spill, Saudi Aramco has temporarily halted all oil shipments through Bab el-Mandeb with immediate effect,” al-Falih said. 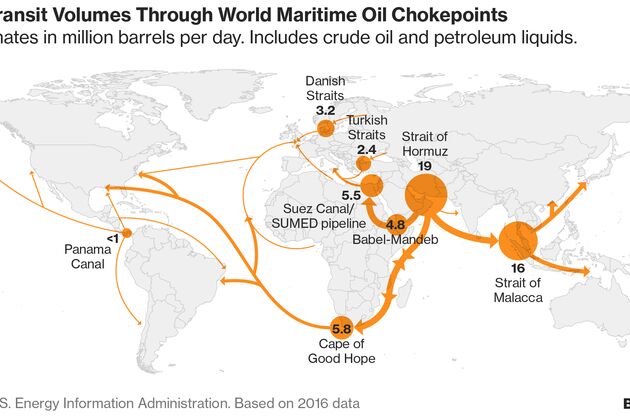 Saudi Arabia, the world’s biggest oil exporter, can still use its East-West mega-pipeline to transport crude from its fields in the Persian Gulf to the city of Yanbu on the Red Sea, bypassing the strait and keeping the European market within regular reach. The East-West pipeline has a capacity of about 5 million barrels a day.

Oil investors took the halt in stride. Brent crude rose as much as 1.2 percent before paring gains to trade 38 cents percent higher at $74.31 a barrel at 12:18 p.m. in London. U.S. West Texas Intermediate in New York was unchanged at $69.30.

A full closure of Bab el-Mandeb, which at its narrowest point is just 18 miles (29 kilometers) wide, would force tankers sailing from Saudi Arabia, Kuwait, Iraq and the United Arab Emirates “around the southern tip of Africa, which would add to transit time and cost,” according to the U.S. Energy Information Administration.

Kuwait is considering a similar halt in oil exports through the strait, Reuters reported, citing Bader al-Khashti, chairman of Kuwait Oil Tanker Co. Iraq’s state-run oil marketing company, known as SOMO, said in a phone message that because it sells on a free-on-board basis, buyers of Iraqi crude take responsibility for their own cargoes once they leave Iraq. “Oil exports from country’s ports are going on smoothly,” SOMO said.

Abu Dhabi National Oil Co., the main government-owned producer in the United Arab Emirates, had no immediate comment. Qatar’s energy ministry didn’t immediately respond to requests for comment, nor did state-run Qatar Petroleum or Qatargas, which exports about a quarter of its liquefied natural gas to Europe.

The Bab el-Mandeb allows for exports into the European market via either the Suez Canal or the Sumed pipeline that links the Red Sea with the Mediterranean through Egypt.

The EIA estimates that in 2016 — the last year with reliable data — 4.8 million barrels a day of crude and petroleum products flowed through the strait, with about 2.8 million going northbound toward Europe, and another 2 million sailing from Europe into the Middle East and Asia. The strait is an important route for European refined oil products to reach global markets.

By comparison, the narrower Strait of Hormuz saw significantly higher flows — 18.5 million barrels a day — in 2016, according to the EIA. Iran’s revolutionary guard has threatened to halt shipments via Hormuz in response to U.S. sanctions.

Saudi Arabia has been fighting with the Houthi militia in Yemen — backed by Iran — for more than three years.

“Fingers will certainly be pointed at Iran, a long-term backer of the Houthis, although the Saudis and others overstate the extent to which Iran influences the Yemeni group,” said Richard Mallinson, geopolitical analyst at consultant Energy Aspects Ltd. in London.

The Saudi halt coincided with news of a blow to arch-rival Iran’s ability to export crude. Hindustan Petroleum Corp., one of India’s state-controlled refiners, canceled one cargo of Iranian oil earlier this month after renewing insurance cover and is unlikely to buy any more until India can obtain a waiver from the U.S., according to an official at the refiner. The U.S. is reimposing sanctions on Iran and asking buyers of Iranian crude to cut purchases.

Aramco, the Saudi state-owned company, kept oil flowing through the Strait of Hormuz during the 1984-1988 period of the Iran-Iraq war known as the tanker war, when both countries attacked vessels in the Persian Gulf, and also during the first Gulf War in 1990-91.