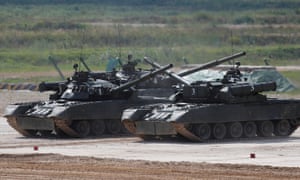 Russia’s intervention in Africa has included arms sales, military services, and an agreement for a Russian logistics base in Eritrea. Photograph: Maxim Shemetov/Reuters

Russia is engaged in a frantic new scramble for influence in Africa, which is being spearheaded by a rash of military cooperation and arms deals signed across the continent in 2018.

The most recent – an agreement for a planned Russian logistics base in Eritrea, which would give it access to the Red Sea – was announced in early September after nine months that have seen Kremlin officials crisscross from the Horn to the Great Lakes and southern Africa.

The pace of Russia’s renewed intervention has raised fears over the human rights and security implications of selling arms to regimes that are weak or in conflict, particularly as the US has signalled its own plans to withdraw troops and close missions.

Scrutiny was heightened last month following the murder of three Russian journalists in Central African Republic while they were investigating the activities of the controversial Russian military services firm Wagner.

But if CAR has been unusual, with the arrival of some 175 Russian private contractors and military personnel in addition to the supply of arms, it has also become emblematic of the wider Russian efforts in Africa, catching out even those working there.

“The official narrative is that the Russian government and CAR had a long standing cooperation,” said one international official who has closely observed events in CAR since Russian advisers began arriving.

“But honestly if anyone had said last autumn that this was going to happen and that there would soon be so many Russian people on the ground, no one would have believed it.”

“Everyone has been struck by the speed at which this has got going,” another observer told the Guardian.

“In January this year we got word the Russians were training the president’s security forces in Berengo in [the former CAR dictator Jean-Bédel] Bokassa’s old palace there. It went from rumours on social media to a sizeable Russian presence at an incredible speed.”

It has not only been the supply of small arms and boots on the ground; there are also concerns Russia has interposed itself as a mediator between the CAR government and rebel armed groups in talks in Sudan. This undercuts the African Union’s own mediation and there have been claims Russia is using them to negotiate access to diamonds, gold and uranium in rebel-controlled areas.

It is not only in CAR that western officials have been caught off-guard by Russia’s escalating interest in Africa.

Senior officials including Russian foreign minister Sergei Lavrov and Valentina Matviyenko, chairwoman of the Russian federation council (and a close ally of Vladimir Putin), have led the charge to sign military cooperation deals.

In a high profile visit in March, Lavrov visited Angola, Namibia, Mozambique, Ethiopia, and Zimbabwe, signing a raft of agreements for economic zones, mineral exploration and for military and technical cooperation.

In July it was the turn of Dmitry Shugaev, director of Russia’s federal service for military and technical cooperation, who appeared on the edges of the BRICS summit to announce the signing of a memorandum of understanding with the Southern African Development Community for military cooperation, including training. 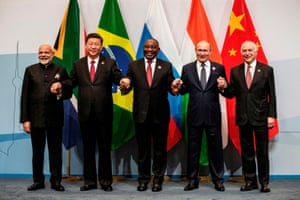 Foreign policy experts, who have noted the sharp rise in Russian engagement in Africa, believe it is being driven by several factors.

One reason is the threat of diplomatic isolation from Europe and the US over Moscow’s policies in Syria and before that Ukraine. This has pushed the Kremlin to seek African allies, not least for their votes at the UN general assembly.

“Russia also sees itself as having a historic footprint [from the era of the Soviet Union when it supported liberation movements],” says Paul Stronski, of the Carnegie Endowment for International Peace.

“When it started its return in the last couple of years the Russian position in Africa was in a sorry state particularly in comparison with China.

“It can’t offer consumer goods like China but what it can offer is arms and occasional debt relief either in exchange for an arms deal or the rights to explore and drill for hydrocarbons or other extractables.

“What we are seeing is a Russian return that is trying to find a niche where they can be competitive. The niche they really own is arms.”

And while the main effort has been fronted primarily by senior Russian officials, Stronski adds, the second level of engagement has drawn in a familiar cast of characters from the twilight world of Putin proxies including businessmen and private military contractors like Wagner, not least in the CAR.

Like other observers, Thierry Vircoulon, of the International Crisis Group, sees a Russian strategy that mixes business, diplomatic and arms sales interests.

“It all started in September last year when the president of CAR went to [the Black Sea resort of] Sochi and made the first arms deal there.

“The relationship has expanded since that time with the compensation for Russian companies being access to the country’s minerals in exchange for military services.”

Vircoulon argues, however, that there is a profound difference between the last period of Russian interest in Africa, at the height of Soviet influence, and today.

“The difference is that now it is not as clear cut. Russia is using private military contractors who, while not officially linked to the Kremlin, are linked to the Kremlin. It its not even much of a disguise and they are targeting the regimes that do have not have very good relations with the west or who are dissatisfied with west like Sudan, Zimbabwe and CAR.”

It has not only been in the sphere of Russian military services that the Kremlin has been active.

Russia has been busy reactivating its old person-to-person networks, many forged during the Cold War when young activists and fighters in the African liberation studied in Moscow.

But perhaps as striking as the presence of military advisors in CAR has been been Russian attempts to build a base in the Horn of Africa.

While efforts to open a base in Djibouti were rebuffed, Sergei Lavrov announced in September that Russia was planning to open a logistics site in Eritrea on the Red Sea, joining a rush of other countries setting up in the Horn, also suggesting that UN sanctions on Eritrea be lifted.