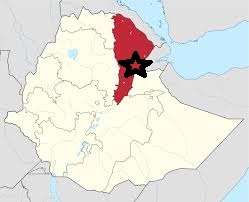 October 15, 2019 (Ezega.com) — Thousands of demonstrators took to the streets Awash Arba, Afambo and Gewane towns in Ethiopia’s Afar regional state, calling for the government to maintain peace and security in the region.

The demonstrations come amid non-deployment of defense forces by the central government at places where armed men on Sunday launched protracted attack in Afambo district, killing 17 innocent people including three children.

According to the head, the attack which was done 35km west of Djibouti’s border was supported with a vehicle with Somaliland license plate. “The attack had nothing to do with disputes between Issa and Afar ethnic groups as opposed to information circulated by some media,” he added.

The security head went on saying that members of the defense forces have not been yet deployed, leaving the residents in Afambo district and surrounding areas insecure.

Similar attacks were carried out four months ago, killing five people. Six individuals who were allegedly involved in the previous attacks have been apprehended as investigations against them continue.

Ahmed recalled that absence of telephone network and inadequate road infrastructure had delayed the defense operation and assistance to the injured.

Addis Ababa has so far said nothing about the perpetrators except dismissing the information that members of the Djibouti defense forces crossed Ethiopia’s border and carried out the attack.

The Ethiopian government denied the reports and said Djibouti does not have any intention to attack or invade Ethiopia considering the close ties between the governments and peoples of the two neighboring nations.

Ahmed called on the federal government to swiftly deploy forces there and give a special attention to peace and security of the region.

Last Month, the National Intelligence Security Services of Ethiopia said it arrested members of the Somali militant group Al Shabaab and ISIS while preparing to launch terror attacks on various targets in Ethiopia.

The terrorists were said to had been preparing to attack hotels, religious places and public areas in Addis Ababa.