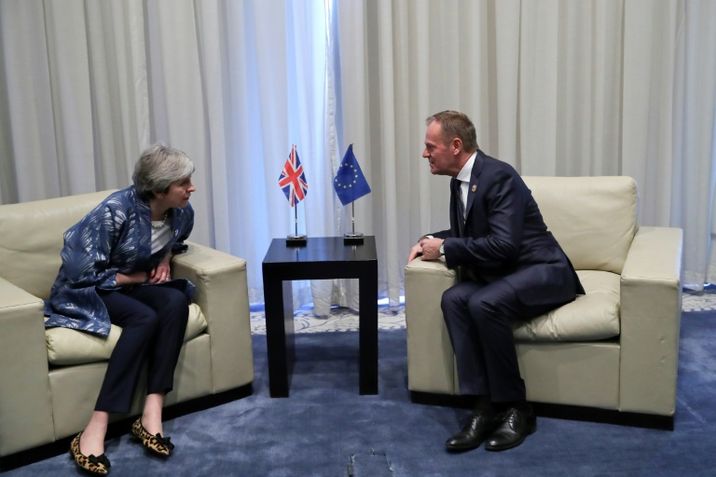 uropean and Arab leaders on Sunday opened their first summit in a bid to bolster cooperation as EU President Donald Tusk said neighbors “should not leave it to powers far from our region”, alluding to China and Russia.

Host Egyptian President Abdel Fattah al-Sisi painted a “bleak” picture for a region hit by wars and terrorism as he appealed for deeper cooperation, in his opening summit speech at the Red Sea resort of Sharm el-Sheikh.

European Union countries view the summit as a way to protect their traditional diplomatic, economic and security interests while China and Russia move to fill a vacuum left by the United States.

Tusk, the president of the European Council who organizes summits for EU countries, acknowledged “there are differences between us” but said neighbors had more at stake than distant powers.

“We need to cooperate and not leave it to global powers far from our region,” the former Polish premier told leaders from about 40 countries.

He did not name those powers but an EU source confirmed he meant China and Russia. China is increasing trade with the region and has established a military base in Djibouti, an eastern African country that borders Eritrea, Ethiopia and Somalia.

Russia, on the other hand, has backed Syrian President Bashar al-Assad militarily since 2015, helping him regain control of the country after nearly eight years of war.

US President Donald Trump’s decision to pull out all 2,000 troops from Syria has further helped Russia’s position as the main power broker in the country.

EU sources said the first EU-Arab summit is all the more important as the United States “disengages” from the region while Russia and China make inroads. 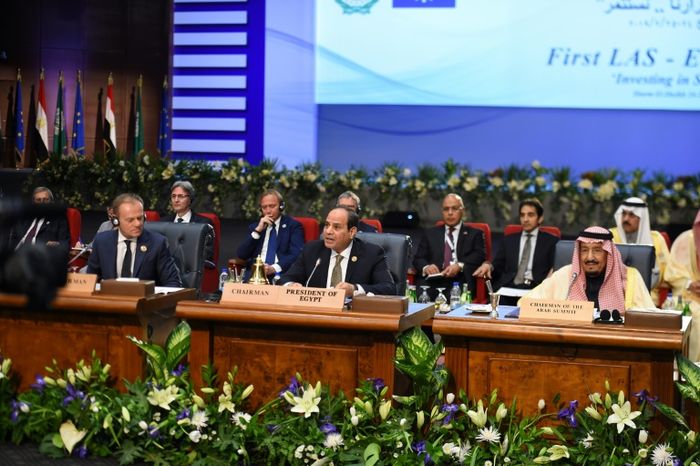 “We don’t want to see this vacuum soaked up by Russia and China,” one of the sources told AFP.

The summit in the southern Sinai desert is heavily guarded by Egyptian security forces who are fighting a bloody jihadist insurgency a short distance to the north.

The presence of so many leaders shows “what brings together the two regions, Arab and European, exceeds immeasurably what divides them”, Sisi told those gathered.

Sisi called for resolving the decades-old Palestinian-Israeli conflict and settling more recent wars and conflicts in Libya, Yemen and Syria.

“The picture is in fact bleak at present,” said Sisi, who led the army’s overthrow of president Mohamed Morsi in 2013 following mass protests against the Islamist leader’s rule.

Egypt is becoming increasingly involved in mediating between Israel and the Palestinians.

In November, Cairo mediated a ceasefire between Israel and Hamas, after months of fighting between the two enemies.

In Yemen, Egypt has supported Saudi Arabia’s war against the Houthi rebels, where at least 10,000 people have been killed since the Saudi-led coalition intervened in 2015.

In Syria, Egypt’s vision is to find a “political solution mainly and not a military one in order to preserve the Syrian state”, according to the government’s website. A long time ally of Assad’s father, Hafez al-Assad, Egypt has a historical commitment to Syria. However, Hafez cut all diplomatic ties with Egypt after it signed a peace agreement with Israel in 1978.

In 2005, diplomatic relations were re-established under Bashar al-Assad.

In his speech to the European and Arab leaders, Sisi called for Arab and EU economic cooperation and warned of “mounting risks and challenges” including terrorism and migration.

“Has not the time come to agree on a comprehensive approach on combating terrorism?” Sisi asked.

Tusk issued an appeal for both Arabs and Europeans to “break the business model” of smugglers taking migrants to Europe.

European leaders first mentioned the Arab summit in Austria in September amid efforts to agree ways to curb the illegal migration that has sharply divided the 28-nation bloc.

But checking migration is just part of Europe’s broader strategy to forge a new alliance with its southern neighbors. A UN official warned that Europe’s failure to bridge divisions on migration “risks blocking all the other discussions” at the summit.

The EU has struck aid-for-cooperation agreements with Turkey and Libya’s UN-backed government in Tripoli, which has sharply cut the flow of migrants since a 2015 peak.

But the UN official said broader cooperation with the Arab League, which includes Libya, is limited without the EU being able to speak in one voice.

Marc Pierini, a former EU ambassador to Tunisia and Libya, said the Arabs are also grappling with divisions since the Arab Spring revolutions that spread across the region in 2011.

British Prime Minister Theresa May held one-to-one talks with Tusk and was due to hold further bilateral meetings with EU leaders as she tries to break the stalemate at home over her divorce agreement with the EU.

Most of the leaders of the 22-member Arab League attended, except for Assad, whose country was suspended from the League over the civil war, and Sudan’s Omar al-Bashir, who is grappling with protests at home.

Absent on the EU side were the leaders of France, Spain, Latvia and Lithuania.