Djibouti Needed Help, China Had Money, and Now the U.S. and France Are Worried

The African nation is tiny, poor, strategically located—and deeply in debt to Beijing.

Inside the carriages on the 10-hour rail journey through land-locked Ethiopia into the tiny Red Sea state of Djibouti, the chirping of mobile phones mingles with a mashup of regional languages and the murmur of the devout at prayer. A woman in a yellow frock trundles past maroon-upholstered seats with her cart: “Coffee! Bunna! Tea! Chai!”

At first glance, there’s nothing conspicuously Chinese about the Addis Ababa-Djibouti Railway, but then you spot the train’s Chinese driver and a few Chinese passengers huddled on a bunkbed. In fact, says Ilyas Moussa Dawaleh, Djibouti’s good-­humored finance minister, “It’s all about the ‘C.’” The railway wouldn’t exist in its current form without a massive infusion of Chinese loans—indeed, most of Djibouti’s economy relies on Chinese credit. And the Chinese might not have shown as much interest if it hadn’t been for Djibouti’s geostrategic location: About a third of all the world’s shipping steams past this barren land on the northeast edge of Africa en route to and from the Suez Canal, the Red Sea, and the Indian Ocean. 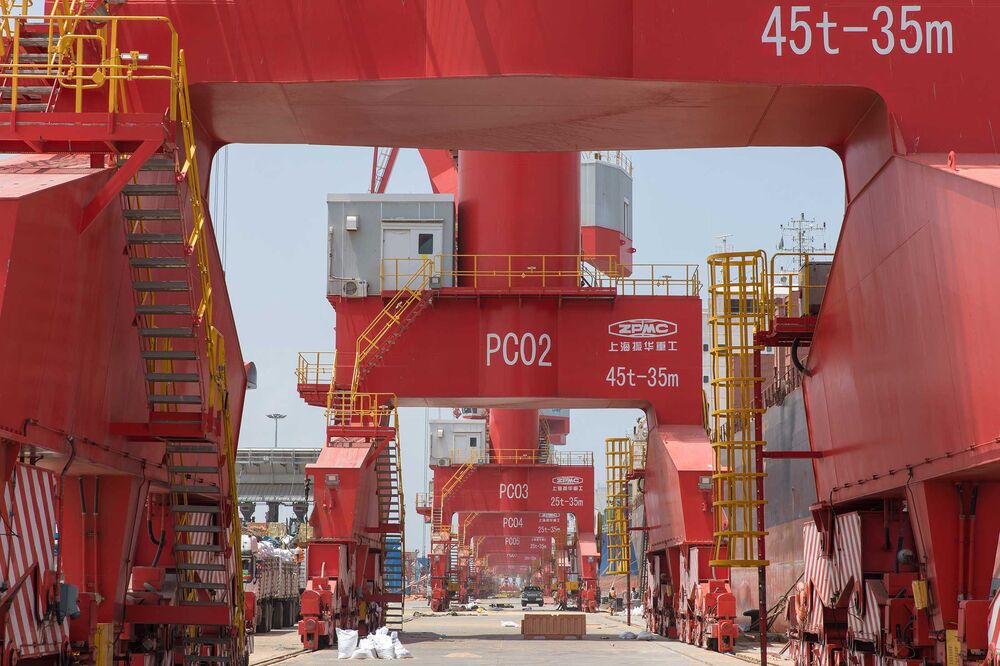 China’s bridgehead here is part of its globe-girding “Belt and Road” initiative, an amalgam of economic strategy, foreign policy, and charm offensive that’s fueled by a torrent of Chinese money and is designed to rebalance global alliances. And as with dozens of other way stations along this new Silk Road, Djibouti’s dalliance with China is raising hackles from Paris to Washington. China has no qualms. “China-Africa cooperation is yielding fruitful results all across Africa, bringing tangible benefits to every aspect of local people’s lives,” Foreign Ministry spokesperson Geng Shuang said at a press briefing on March 18. “It is these people who are in the best position to judge the effects of China-Africa cooperation projects.”

The railway will eventually string together a necklace of big Djibouti infrastructure projects in which the Chinese, through state-owned companies, have substantial interests: the Doraleh Multi-Purpose Port, the Doraleh Container Terminal, and the Djibouti International Industrial Parks Operation, a sprawling manufacturing hub. At one point, the railway skirts within a mile of the two-year-old Chinese People’s Liberation Army support base, which was China’s first overseas naval station. 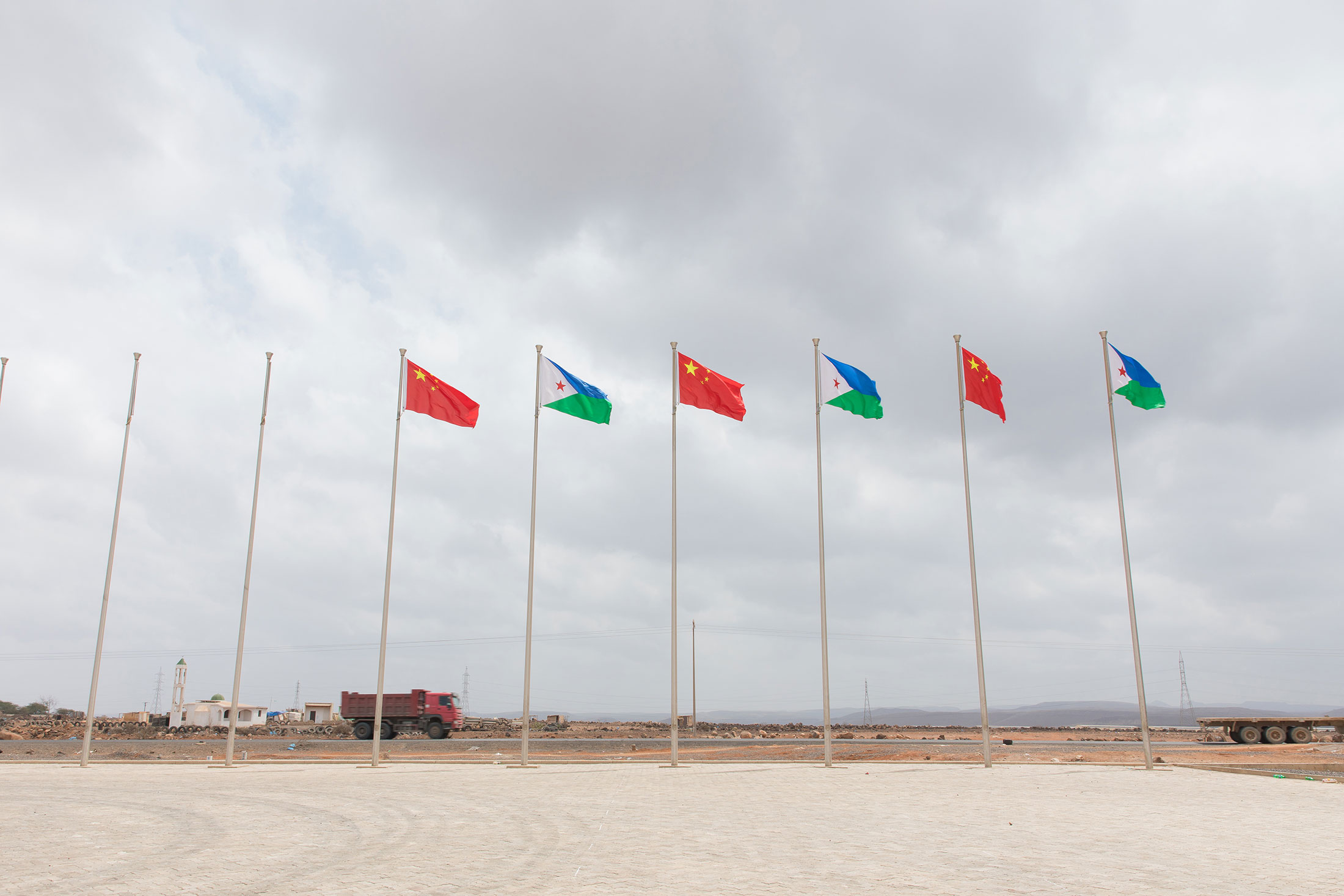 China Merchants Port Holdings Co., a state-owned corporation, wants to turn Djibouti into “the Shekou of East Africa,” Dawaleh says, referring to the free-trade zone across Shenzhen Bay from Hong Kong. Djibouti, whose gross domestic product was $1.85 billion in 2017, can use the help. According to the World Food Programme, 79 percent of Djiboutians live in poverty and 42 percent in extreme poverty. Barely larger than Wales, the nation has a population of about 1 million people. Livestock represents the main livelihood of a third of the population, but the country, whose meager natural resources include salt and gypsum, has to import 90 percent of the food it needs.

As clanking machinery and the rising dust of construction activity along the coast attest, Djibouti is making progress of a sort, but it’s coming at a steep price. Under President Ismail Omar Guelleh, the one-party state is partway through what started out as a $12.4 billion infrastructure development program, much of it funded through loans from the Export-Import Bank of China.

China has taken major stakes in some of those projects. Take the sprawling International Industrial Parks Operation, where red lanterns left over from Chinese New Year celebrations were still hanging in March. Ten percent of this free-trade zone is owned by the Port of Dalian Authority, China; 30 percent by China Merchants, which owns about one-fifth of Dalian port; and the rest by Great Horn Investment Holding, a wholly owned subsidiary of the­ Djibouti Ports and Free Zones Authority.

China Merchants owns 23.5 percent of a Djiboutian holding company that in turn owns the Doraleh Container Terminal, Djibouti Dry Port, and the Doraleh Multi-Purpose Port. The latter’s been operational since last year, built on $580 million in loans from the Chinese EximBank that Dawaleh describes as “almost concessional.”

China’s grip was tightening as Djibouti’s debts were soaring. In a 2017 report, the International Monetary Fund said Djibouti’s public debt—the lion’s share of it owed to China—rose from 50 percent to 85 percent of GDP over the previous two years. In December the IMF criticized the government for falling deeper and deeper into debt.

“The Djiboutian authorities’ strategy of investing in infrastructure to transform the economy and position the country as a logistics and commercial hub offers great opportunities for economic growth and development,” the IMF said. “However, the financing of this strategy through a buildup of debt has resulted in debt distress, which poses significant risks. Public and publicly guaranteed debt is expected to be around 104 percent of GDP at end-2018.” 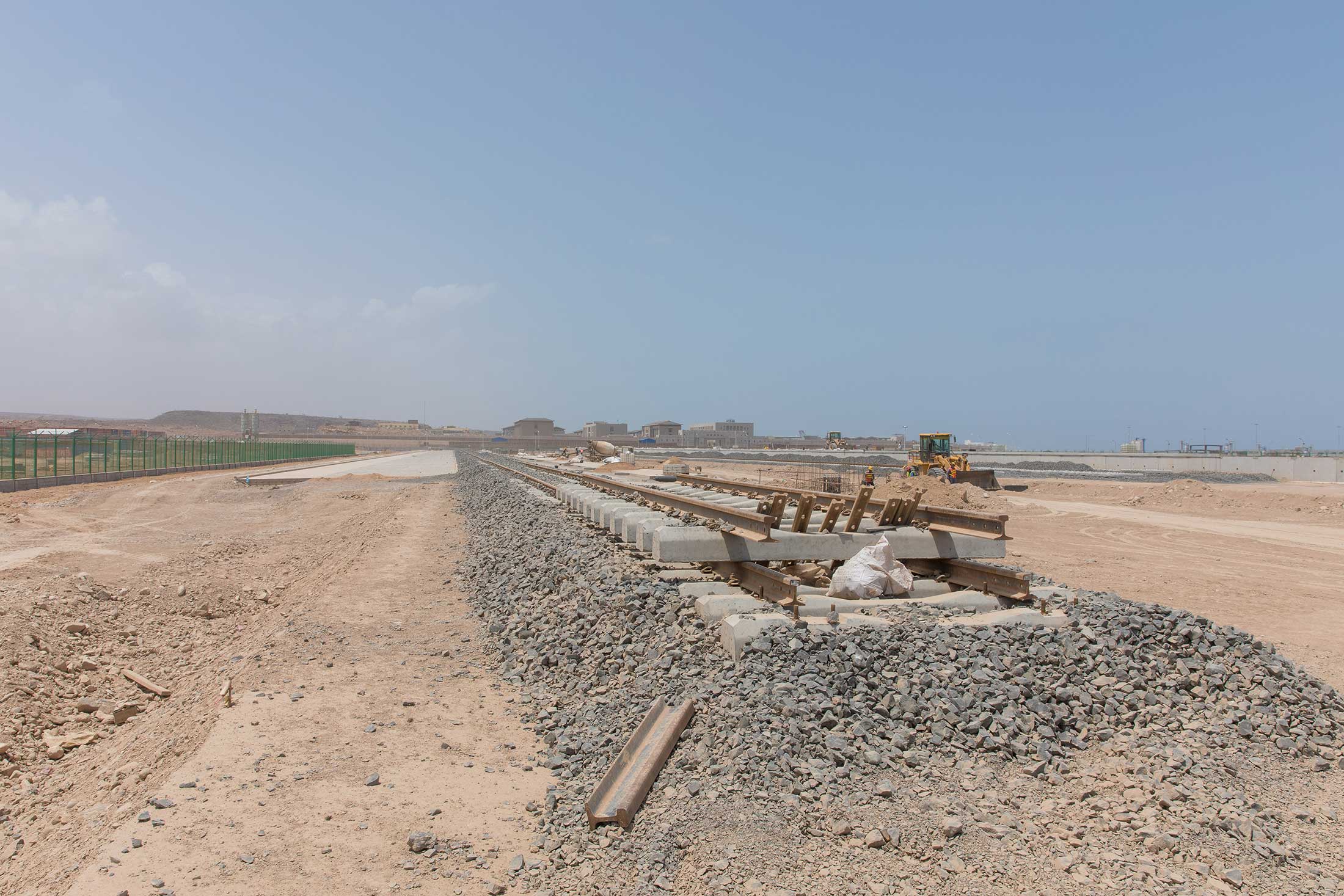 The government here takes a different view. Dawaleh says the IMF shouldn’t include the debts of Djiboutian state enterprises in its assessment because those enterprises “are overperforming or have the capacity to overperform.” “This should not harm us,” he says in his office in Djibouti City, having just returned from meetings with Vice President Wang Qishan and other Chinese officials in Beijing, where he sought to restructure Djibouti’s EximBank loans.

Dawaleh was there to talk about two loans in particular—$460 million for Djibouti’s share of the railway and $340 million for a water pipeline. (The 750-kilometer [466-mile] railway is a joint project of Ethiopia and Djibouti, built with more than $4 billion in EximBank loans; 656 kilometers of track run through Ethiopia, providing it with a valuable trade link to the sea.) Djibouti wants to refinance the loans because neither project is generating the revenue it should at this stage. The railway began operations last year, a year and a half behind schedule, and is running one freight train a day instead of three as planned. Power supply problems have prevented the pipeline from operating at all. Djibouti’s grand expectations, Dawaleh says, do “not always match the reality.”

At sunset one day in March, a dozen schoolchildren are playing along the tracks on the outskirts of Djibouti City. They’ve got a great view of the city, the port area, and, in the distance, the Gulf of Tadjoura. The most fun to be had on the tracks, says Hamza Mahamad Osman, 14, is when a slow-moving train from Ethiopia rolls by with empty containers. “You can jump on it and hide away,” he says. “But you have to jump off before ending up in the port and in a ship!”

Farther along the tracks, from the train station at the Doraleh Multi-Purpose Port, you can see the high walls that hide much of the Chinese People’s Liberation Army support base from view. The roofs of several large three- and four-story buildings look like something vaguely out of the Forbidden City in Beijing. “Yes, it’s very nice,” says the port’s commercial director, Habon Abdourahman Cher. “But don’t take a picture.”

China is hardly the only country with a military presence in Djibouti. The U.S. Africa Command is headquartered at Camp Lemonnier, a naval expeditionary facility that’s the only permanent American base in Africa. The Japanese, Italians, and Spanish are also here. The Saudis are planning a base. France has had a foothold since at least 1894; what is now Djibouti was French Somaliland, a colony, until 1977.

When French President Emmanuel Macron visited in March, he did more than highlight France’s intention to spread its influence in East Africa and beyond. He also chided Djibouti for its overreliance on Chinese largesse. “What can look good in the short term,” he said, “can often end up being bad over the medium to long term.” Paris, he said, “wouldn’t want a new generation of international investments to encroach on our historical partners’ sovereignty or weaken their economies.”

The U.S. has been beating this drum even more loudly than the French. “China uses bribes, opaque agreements, and the strategic use of debt to hold states in Africa captive to Beijing’s wishes and demands,” John Bolton, President Trump’s national security adviser, said in a speech in Washington in December. Geng, the Chinese Foreign Ministry spokesperson, dismissed such talk as “groundless accusations filled with cold war mentality.”

Bolton warned of the consequences if, as has been rumored, China Merchants were to gain control of the Doraleh Container Terminal via a debt-for-equity swap. “Should this occur,” he said, “the balance of power in the Horn of Africa—astride major arteries of maritime trade between Europe, the Middle East, and South Asia—would shift in favor of China.” Aboubaker Omar Hadi, chairman of the Djibouti Ports and Free Zones Authority, described Bolton’s assertion as “propaganda.” “We have local expertise,” he says. “Why would we look at importing other entities to operate our ports?”

Near the shores of the Gulf of Tadjoura, meanwhile, an office tower, a hotel, and warehouses are rising at the Djibouti International Industrial Parks Operation. The vast free-trade zone sits beside an array of key commercial operations: the Doraleh Container Terminal and the Doraleh Multi-Purpose Port.

Neima Abdillahi Ahmed is the industrial park’s commercial manager. She says she’s seen photos of Shekou, the Chinese free-trade zone, from the last century—and recognizes the changes she’s living through. “Thirty years ago, Shekou was like Djibouti,” she says. “There was nothing.”—With Han Miao.