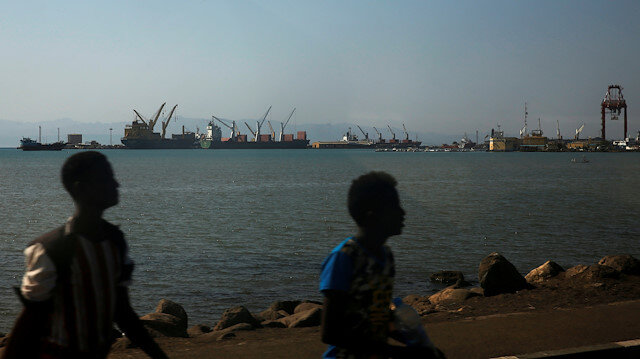 File photo: A general view of the Port of Djibouti is seen in Ambouli, Djibouti April 23, 2017.  Photograph: Jonathan Ernst

In 1991 thousands of Ethiopians, military men and women included, made an arduous journey, crossing the border from the Horn of Africa nation of Eritrea into the tiny nation of Djibouti.

They fled as Eritrean liberation forces had captured the territory from neighboring Ethiopia, which the Red Sea coastal nation was then a part of. Two years later, in 1993, the Eritreans were to formally secede from Ethiopia.

But before the Ethiopians could reach the city of Djibouti — also the nation’s capital — French fighter jets and helicopters based in Djibouti forced the immigrants to make camp where they were.

“We were given everything that we desperately needed and plenty of it: food, blankets, bottled water, and we saw that Djibouti was protected, though our move wasn’t meant as an attack but to seek a safe haven,” a former member of the Ethiopian Navy who did not wish to give his name told Anadolu Agency.

The group was later transported to Ethiopia in a Red Cross/Red Crescent-backed operation.

Over a quarter-century on, this incident is exactly what many Djiboutians mention when asked why their small country houses so many naval bases and such a heavy military presence.

Many feel safer and protected in this volatile region of the world – the Horn of Africa.

Since Djibouti won its independence in 1977, in addition to a longstanding French naval base, the nation of less than a million people has come to house more foreign military bases than any country in the world, including a U.S. naval base (in the wake of 9/11), a Japanese one (2011), an Italian base (2012), an EU military quarter, and a Chinese naval base, in 2017 — its first overseas base ever.

Not all of these bases coexist peacefully.

The U.S. recently complained about a Chinese laser beam hitting its pilots.

According to a top diplomat who knows the ins and outs of Djibouti politics – he asked for anonymity, like all other people quoted in this piece – the Americans haver grown apprehensive of the Chinese.

“The Americans were happy and comfortable until the Chinese came to the scene, and now they seem very uncomfortable,” he told Anadolu Agency.

Recently the U.S. notified its pilots to “exercise caution when flying in certain areas in Djibouti,” in reaction to alleged military-grade laser beams temporarily blinding the pilots. According to a U.S. circular, the laser beam originated from the nearby Chinese base.

Clearly, therefore, there has been competition in Djibouti, a tiny but strategically very important port country. Djibouti sits strategically on the Bab-el Mendeb Strait, the busiest maritime lane in the world.

The strait connects the Indian Ocean via the Gulf of Aden to the Red Sea, and then through the Suez Canal, the Mediterranean Sea, thus serving as a main conduit for goods between Asia and Europe.

Its importance is set to grow with the $64 billion Chinese One Road, One Belt Initiative, also known as the New Silk Road, set to more easily connect China with world markets.

A retired Djiboutian colonel told Anadolu Agency that the bases in Djibouti have been used as launch pads for anti-terrorism operations in the Middle East and neighboring Somalia, a nation long plagued by deadly terrorist attacks.

“Those operations mainly belong to the U.S.,” he said.

After the infamous “Black Hawk down” incident of 1993 in the Somali capital Mogadishu, resulting in the death of some 18 U.S. soldiers and hundreds of Somalis, the U.S. largely confined itself to air attacks against the terrorist group al-Shabaab.

The U.S., according to the former officer, has launched attacks on places in the Middle East from its base in Djibouti and has allies in the form of the Japanese and other Western powers who put up camp in the tiny nation.

But a Djiboutian economist who spoke with Anadolu Agency vehemently opposes the idea of Djibouti playing host to so many military bases.

“We don’t know what the superpowers are doing from their bases here,” he said, adding that they do not report even to the president.

“If there’s a need to secure the area, and I’m sure there is, it should be done by a multinational force drawn from countries in the region, not these superpowers,” he said.

According to him, China set up its base largely to protect its strategic interests in the region, accentuated by the One Road, One Belt Initiative.

In addition to the many naval bases, there have also been military activities in the Red Sea by Mideast countries such as Saudi Arabia, the United Arab Emirates, and Qatar.

As 2018 drew to a close, a military drill between six Red Sea countries — including Djibouti — was launched in Saudi Arabia, further highlighting the importance of the region.

The Red Wave 1 exercise brought together naval forces from Saudi Arabia, Djibouti, Egypt, Jordan, Sudan, and Yemen, along with observers from Somalia.

Ethiopia is a regional powerhouse which was made landlocked when coastal Eritrea seceded, following decades of war.

Yet last June, Ethiopia’s parliament approved a bill providing for the country to launch a naval force.

While many see no need for a landlocked country to have a navy, others in Ethiopia welcomed the move.

Arguing for the initiative, Ethiopian Prime Minister Abiy Ahmed said the need to reconstitute a naval force was part of reforms being made within the Ethiopian military. The reforms, he said, should “take into account the current fast-changing world and socioeconomic and political situation in Ethiopia.”

The Eritrean port of Assab is only 60 kilometers from Ethiopia’s northeastern border and also not far from the port of Djibouti.

All said, the growing presence of foreign militaries in Djibouti points to the rising importance of the Red Sea coast in terms of security, the economy, and regional geopolitics.

Africa: Why Djibouti’s China debt is raising the alarm