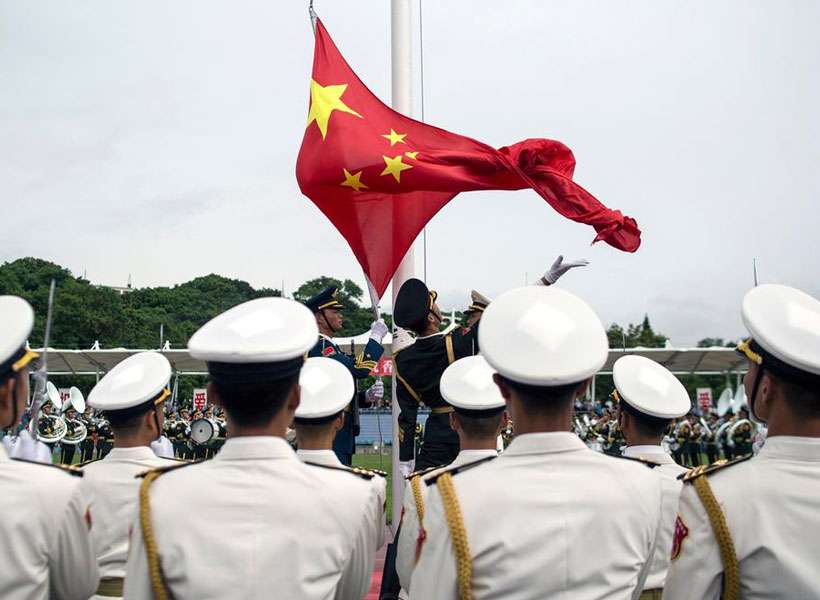 Chinese influence in East Africa is a topic of growing debate and concern for Western nations and allies. In fact, this purported growing Chinese influence in the region continues to expand as a prominent issue for United States (U.S.). The desire for the U.S. to protect its national interests in the region is apparent. Specifically, this is a growing concern for the Combined Joint Task Force-Horn of Africa (CJTF-HOA). CJTF-HOA is strategically located in Djibouti on Camp Lemonnier and has a diverse mission that includes conducting security force assistance, executing military engagement, providing force protection, and military support to regional counter-extremist organization operations with the goal of supporting allied regional efforts, ensuring regional access and freedom of movement, and protecting U.S. interests (CJTF-HOA 2018). CJTF-HOA also maintains an area of responsibility (AOR) that covers the East African nations of Burundi, Djibouti, Eritrea, Kenya, Ethiopia, Rwanda, Seychelles, Somalia, Tanzania, and Uganda.

CJTF-HOA respects the sovereignty of each of its AOR countries, even though many of its operations and engagements have as a major goal to maintain influence in the region. The task force is not the only group to partner with the various AOR countries: Chinese financial aid, diplomacy, and involvement has been heightened with the establishment of a Chinese Support Base just miles away from CJTF-HOA’s Headquarters. The Chinese base, built for the People’s Liberation Army Navy (PLAN), has direct access to the Doraleh Multipurpose Port, a strategic maritime chokepoint on the Gulf of Aden into the Bab-el-Mandeb Strait. This development begs the question: why did Chinese leadership choose Djibouti to build the first Chinese overseas base? Was this decision part of a larger strategic plan to increase influence within East Africa?

By financial figures, Chinese aid and investment in Africa has skyrocketed over the last decade. Perhaps this increase is part of the Chinese push for outgoing investment, termed the “Going out” or “Going global” strategy. According to the China Africa Research Initiative, between 2009 and 2012, “China’s direct investment in Africa grew at an annual rate of 20.5%.” Moreover, a white paper published by the Chinese State Council in 2013 indicated: China has become the largest trade partner of Africa, Africa has become a major importer of Chinese goods, Africa is the second largest construction project market (overseas), and Africa is China’s fourth largest investment location (China-Africa Economic and Trade Cooperation 2013).

China has also enhanced cooperation in agricultural production, both for importation and exportation. According to the Chinese State Council, “The Chinese government attaches great importance to its mutually beneficial agricultural cooperation with Africa and works hard to help African countries turn resource advantages into developmental ones and sustainably develop their agricultural capacities.” (China-Africa Economic and Trade Cooperation 2013) Moreover, the Chinese State Council indicated the significance of capacity building throughout the continent. Of note, the white paper highlighted that China aids African nations while avoiding any demands for changing political conditions. To further this point, the State Council demonstrates this example by providing support to nations such as South Sudan, Malawi, Djibouti, Guinea, and Togo, easing water issues and improving the conditions of local facilities. (China-Africa Economic and Trade Cooperation 2013)Redefining its focus in East Africa, China has concluded at least 15 bilateral deals and has even forgiven enormous sums of debt.

The Forum on China-Africa Cooperation

The desire for a continued and growing Chinese partnership in Africa is visible through the Forum on China-Africa Cooperation (FOCAC) Summit. During the 2018 FOCAC summit, the Chinese Premier offered a total of 60 billion dollars in trade and economic initiatives. The funds will be allocated to projects aligned to the Chinese government’s Belt and Road Initiative, covering telecommunications, construction of roads, bridges and sea ports, energy, and human capacity development. The funding is broken down into several parts where 15 billion is categorized as government grants, 15 billion as interest free loans, 20 billion of credit lines, and 5 billion for financing imports from Africa. (Dube, 2016)FOCAC was formed in 2009 to establish closer Chinese ties and partnership with African nations. This strategy has been seemingly successful as Sino-African trade is estimated at 170 billion U.S. dollars in 2017, increasing drastically from only 10 billion dollars in 2000 according to China’s Ministry of Commerce. (KTLA 2018)

As China’s Belt and Road initiative starts to take hold in Kenya, Uganda, and Rwanda, it might seem that its sole permanent military footprint outside of sovereign China may be getting overlooked by Beijing. However, China has now preserved a logistical hub exactly where it needed it.  China’s role as a resource extractor will almost certainly continue: China now not only has a large workforce in nearly every East African nation, it also has the ability to remove its gains one ocean-going barge at a time from its deep-water port in Doraleh.

The Chinese Military in East Africa

In 2014, Beijing confirmed that it would build their first military base overseas, a PLAN logistics support base at Doraleh, Djibouti, thereby raising tensions for Western nations and allies in the region and abroad. The U.S., France, Italy, and Japan all have bases in the rather small East African nation. There are various assessments as to why China opened the base in Djibouti. There is likely not a single, one-dimensional answer, but multiple factors that made this location advantageous for this investment. First, Djibouti is a strategic location. The Bab el-Mandeb strait is only 18 miles wide at its narrowest point and is of vital strategic interest, as it connects to the Suez Canal. The strategic importance of this location is no different for China than for the U.S. According to the Chinese State News Agency, Xinhua, the establishment of the base ensures “China’s performance of missions, such as escorting, peace-keeping and humanitarian aid in Africa and west Asia. (Al Jazeera 2017)In exchange for the PLAN’s use of its port, Djibouti’s government requested that China assist in the development of military capabilities, including patrol boats and airplanes, as well as the establishment of a civilian maritime complex. (Dube 2016)Interestingly, this construction of China’s first overseas base is a departure from their non-interference policy in African government affairs. Similarly, China has increased the number of soldiers it provides to the United Nations and African peace mission, notably increasing numbers in South Sudan. Aligning with Chinese interests, South Sudan is a major exporter of oil to China and perhaps catalyzed China’s shift away from their previous non-interference policy. (Council on Foreign Relations)

The military base will allow China to provide protection for its citizens in Djibouti and the greater Horn of Africa region, an ability that China currently lacks in other African nations. However, “experts warn that by relying too much on China’s infrastructure projects, Djibouti could become trapped and enter a state of quasi-dependence on Beijing.” (Dube 2016) While this warning heralds potential implications for Djibouti, this dependence could be a vital component of Chinese strategy. At the current juncture, over 80 percent of Doralehport traffic comes from Ethiopia, which has no coastline. Chinese investments, including the commissioning of the railway between Addis Ababa, Ethiopia and Djibouti, will strengthen the position of Djibouti as one of East Africa’s largest logistics gateways. By significantly increasing the share of port activities in Djibouti’s economy, Chinese projects will increase Djibouti’s vulnerability and dependence. However, as Ethiopia and Eritrea continue to smooth previously tense relations, Ethiopia is seeking to utilize Eritrea rather than Djibouti as a logistics hub. This potential move no longer only has implications for Djibouti, but China will now likely be a major player in the steering of this decision, as the port’s profitability has various implications for China’s continued success in the region.

As one analyzes China’s increased involvement in East Africa, its culture is important and certainly impacts the evolution of its African foreign policy. According to Yaqing (2012), four major themes of Chinese culture are: contextuality, correlativity, complementarity, and changeability.  Yaqing describes contextuality as looking at decisions as a matter of context in the environment without thinking about the individual. Of note, contextuality begets the “shi” assumption. According to Yaqing (2012), “For policy makers, shi is judgment regarding the timing, the themes, and the trends within the context.” In a 2018 Beijing declaration at FOCAC, the following demonstrates how contextuality shapes China’s vision for increased partnership:

We believe that China and Africa are a community with a shared future. China is the largest developing country. Africa is the continent with the most developing countries. Sharing weal and woe, the Chinese and African peoples have forged a deep friendship rooted in our similar historical experiences, development tasks, and political aspirations. We agree to strengthen collective dialogue, enhance traditional friendship, deepen practical cooperation, and work together toward an even stronger China-Africa community with a shared future.

The next concept, correlativity, notes that all things relate to one another. This type of thinking is visible in the Chinese Belt and Road Initiative. Using the aforementioned excerpt from the Beijing declaration at FOCAC, this diplomacy and fostering of a positive interconnection between 53 African nations is apparent. The choice of words like “deep friendship,” “similar historical experiences,” “collective dialogue,” and the phrase “stronger China-Africa community with a shared future” speaks to the collectiveness of nations to achieve shared goals through cooperation.

The third element, complementarity, describes the world as composed of two opposites. These opposites, the thesis and anti-thesis, “work as opposing forces to complete a transformation into this new synthesis.” (Yaqing 2012)While the Western world may remain wary of Chinese involvement in East Africa, this anxiety does not inherently wield conflict. In fact, China’s goal for stability and increased capacity building aligns with the American CJTF-HOA’s purported goals in the region.

Finally, changeability is a concept that contends that “seemingly irrelevant or even opposing objects can change, turn into each other, and become part of a combined whole.” (Yaqing 2012)It is this type of mindset that could explain why the Chinese started to invest and engage in Africa when other near-peers would not. They saw the promise of natural resources and the determination of the African nations to open up and do more globally.  The Chinese theory that everything constantly changes and that “misfortune can be a forerunner for fortune” lends itself neatly into the current East African sphere of politics and foreign policy changes. (Yaqing 2012) One could hypothesize that the Chinese cultural outlook on change, coupled with the ongoing change afoot in the region, created a perfect situation for the current Chinese foreign policy expansion in East Africa.  This has been shown by the amount of effort put into the recent FOCAC symposium by the African Union nations and also in the amount of money the Chinese are willing to invest into the area. The culture of any nation plays a role in determining policy. Some cultures drive initiatives and actions more aggressively than others. In this case, China is the nation that arguably has found an ability to successfully tie to its culture to the cultures of the East African region. If it continues to be successful in promoting this transcultural connection, then China will likely continue to outpace and outperform the United States in this critical global region.