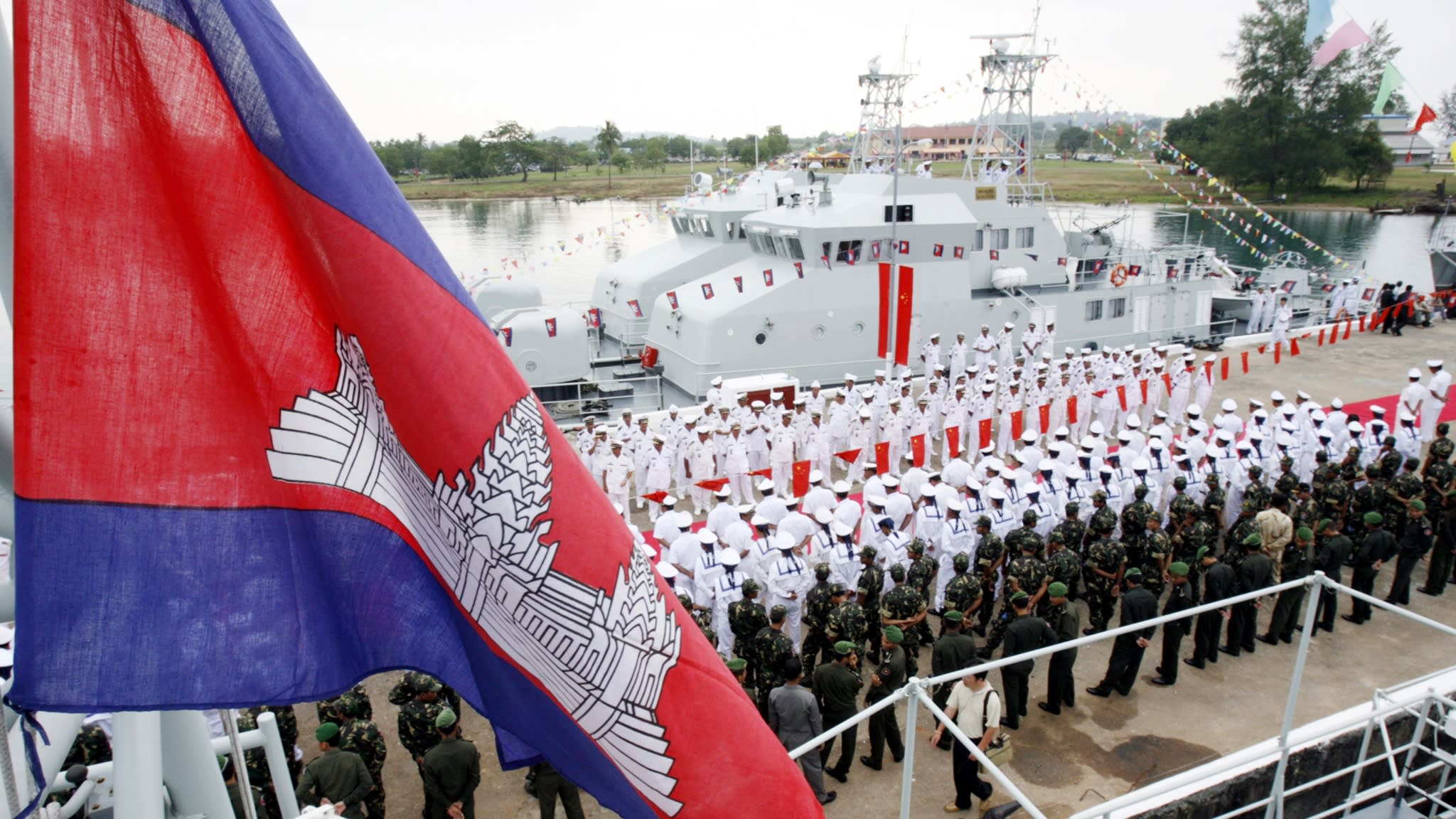 Cambodian Navy sailors stand in formation alongside a Chinese naval patrol boat at Cambodia’s Ream Naval Base: China and Cambodia reportedly have signed a secret agreement to create an outpost for Chinese military forces.   © Reuters

China’s potential military expansion through bases in Southeast Asia has made headlines in recent weeks. A media report that Beijing might be leasing part of Cambodia’s well-situated Ream naval base prompted Prime Minister Hun Sen to denounce the claims as “fake news.”

Despite Hun Sen’s claims, the overseas reach of China’s armed forces is growing. Some may watch the shift in the strategic balance with alarm, but others will recognize that as a major power and economy, China has legitimate reasons to expand its naval presence.

There is a pressing need, therefore, for other powers to move beyond alarmist finger-pointing and instead constructively engage with China as it evolves into a global maritime security actor.

Currently, China only has one overseas naval base, a support facility in Djibouti near the Chinese-operated port of Doraleh. The case for China’s presence in Djibouti is clear, as piracy remains a major problem in African waters.

But there has been greater controversy over reports that China is planning a similar base near the Gwadar port in Pakistan. This is a development that would greatly perturb another Asian powerhouse — India.

Chinese analysts argue that the proposed Gwadar naval base is not a military move, but driven by logistical concerns. China wants to develop Gwadar into a land and sea transit hub, providing China with an alternative access to the Indian Ocean. A Pakistan Navy ship berth at the Gwadar port: China wants to develop Gwadar into a land and sea transit hub.   © AP

Chinese naval vessels patrolling the area and escorting civilian vessels do require a base for maintenance and resupply. But Indian analysts have expressed concern that the site would allow China to challenge India’s interests in the Indian Ocean, and may represent China siding with Pakistan as leverage against India.

Sea routes are playing a larger role in Beijing’s thinking, with the Maritime Silk Road emerging as a major component of China’s Belt and Road Initiative. In July, Xinhua reported comments from Chinese defense minister Wei Fenghe indicating that China was willing to deepen military exchanges with Caribbean and Pacific island nations under the framework of the BRI.

Speaking at the Forum for Senior Defense Officials from Caribbean and South Pacific Countries held in China, General Wei clarified that cooperation would be in areas such as anti-terrorism, peacekeeping, and disaster relief.

The security establishment in Washington has long maintained that China’s BRI investments, which include airfields and port facilities around the world, have the potential to fulfill a strategic military function.

The investments have been called a “string of pearls,” and experts have suggested that the network of ports and logistics facilities could allow China to project its military power further afield. At the same time, they will allow it to secure and protect vital sea lanes, especially the choke points through which its supplies of energy pass.

However, from Beijing’s point of view, China is only pursuing the same maritime policies as other trading nations. China’s African base in Djibouti exists alongside bases belonging to the U.S., France, Japan, and Italy.

In Asia, Chinese commentators argue that China is only playing catch-up with the U.S., and it is America’s expansion that threatens the regional balance of power, not China’s.

Alongside the furor over Ream, there has been controversy over an alleged deal to establish an American military presence in Sri Lanka. British plans to establish a new Southeast Asian naval base have also been criticized by some in the region.

There are more parallels. Hun Sen claims that hosting foreign military bases is against Cambodia’s constitution, but this does not rule out an arrangement to give Chinese military vessels greater access to Cambodian ports in a way that falls short of formally handing over an entire base to Beijing.

Singapore’s military cooperation with the U.S. has been managed on similar lines. There is no U.S. military base in Singapore, but American vessels and aircraft are allowed to stop in Singapore and access Singaporean facilities. This is an important distinction, and one that Southeast Asian countries are conscious of.

In comparison to the U.S. and its allies, Southeast Asian countries have been relatively circumspect in commenting on China’s growing military footprint. Countries in ASEAN must walk a fine line between pragmatic cooperation with China while defending their national interests.

ASEAN countries have consistently sought to build an atmosphere of trust, instead of escalating tensions. Last year, the grouping conducted an inaugural ASEAN-China maritime exercise, the first such drill between ASEAN and another country.

This included practicing the Code for Unplanned Encounters at Sea, a set of guidelines and communications protocols to reduce the chances of incidents between naval vessels.

China is aware that its growing military footprint is unsettling to other nations: witness its clear denials

f rumors regarding Ream and its rejection of the framing of its BRI program in a military context, which it has derided as “Cold War thinking.”

Instead, Chinese leaders portray the $1 trillion economic initiative as promoting “win-win” economic development for countries involved, and says it will attempt to manage the characterization of its overseas reach.

It is thus potentially myopic to see China’s BRI solely in terms of military strategy, given the myriad factors driving the initiative, both in China and its partner nations.

However, the expansion of China’s naval power is likely to be inevitable. In economic terms, China is already a superpower. It is no surprise that China is now developing the corresponding military power projection of one as well, to protect its interests as these begin to grow around the world. Historically, this has been the path for many major global powers.

But China is still feeling its way, and its progress and growth in this area will be closely watched by its neighbors. If the intention of other nations is to ensure that China grows into a responsible and benign superpower, they must engage with it and entrench it in international rules-based systems. This will bear more fruit than premature accusations and speculation.

Greater collaboration in maritime security, trade could be key to Africa’s economic future.