Never mind that China is the talk of the world, right now, what with the U.S.-China trade war in full swing, I’ve talked a lot about China’s overbuilding bonanza since the 1980s… and especially since 2000 with total debt exploding 64 times since.

China doesn’t just print money like the rest of the developed world. Instead, it “prints” condos… and roads, railways, bridges, office buildings, and malls. All with less visible local debt that the Chinese government implicitly guarantees.

It does this to create a rapid job train to attract rural migrants into fast-growing cities where their GDP per capita tends to triple. It’s a great plan. They’re long-term thinkers, much more than we are. Only problem is, they’re overdoing it more than any major country or region in history! In the process, yet another debt bomb is under construction.

Southeast Asia and South Korea had a similar infrastructure spending binge into 1997 that saw a crash and a four-year financial crisis and downturn into 2002.

That was nothing compared to what China is now doing.

And, as if it weren’t enough to massively overbuild its infrastructures, now China has the even grander Belt and Road Initiative. A vision they’re creating with debt to fund infrastructures to link Asia, the Middle East, Europe, and Africa for greater trade. Again, great long-term plan… if only the debt bomb weren’t a side effect.

They’re overdoing it all again, especially in the late stages of the greatest global bubble in history, of which China is the epicenter much as the U.S. was for the Roaring 20s Bubble.

Look at the public debt, much of it owed to China, that is being created in some very marginal emerging countries. This WILL cause financial crises and defaults – much of it to China! 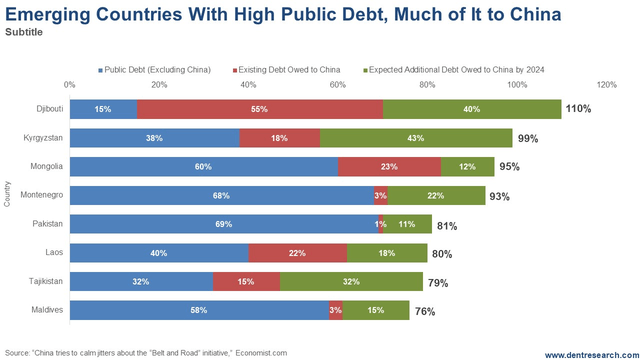 The worst is tiny Djibouti in the Horn of Africa, at the strategic tip of the Red Sea (where humans first crossed out of Africa to populate the rest of the world). It’s headed towards 110% public debt to GDP, 55% now and 90% projected to be owed to China.

Pakistan is the largest country, with 81% of GDP debt, but only 12% to China.

Normal public debt ratios would be more like 80% for developed countries and 40% for emerging ones, who are less credit-worthy and much more fragile.

There have been many countries already objecting to China’s plans and resisting taking on more debt.

And China is now exporting its overbuilding and debt strategy at the worst time possible to the worst countries possible.

I’ve been warning that emerging country corporate debt is out of control and cruising for a bruising. So is public debt with countries that have been pushed into China’s grand global plan.

The emerging country debt problem is one of many triggers for the debt crisis ahead, but likely the first. The greatest impact will come from the global real estate bubble, in which China is also the most overvalued and the epicenter as well.