A Chinese Navy vessel prepares to depart Stonecutters Island, Hong Kong, in this 2017 file photo. Washington’s security establishment has long claimed China’s Belt and Road investments in ports and airfields around the globe have a strategic military component.   © Getty Images

Cambodia shows how Beijing’s ‘string of pearls’ threatens US ties

SIHANOUKVILLE, Cambodia — As a military installation, Ream Naval Base on Cambodia’s southwestern coast is not much to behold. At least, not yet.

Moored to its concrete pier, which was refurbished four years ago with funds from the U.S. military, four Soviet-era Stenka patrol boats and several small Chinese-made vessels comprise most of the Royal Cambodian Navy’s coastal fleet. Some of the boats are not seaworthy and at least one navy craft has been spotted hauling construction materials for commercial developments on nearby islands in the Gulf of Thailand.

But, while the vessels and facilities are modest, Ream’s geopolitical importance may be set to grow as China pours money into Cambodia under its Belt and Road Initiative.

Early this month, Ream became the second site in Cambodia to draw the attention of the U.S. for what a senior Pentagon official suggested was its potential to host a Chinese military presence. And a Wall Street Journal report this week said China and Cambodia have signed a secret agreement that allows Beijing to use Ream for 30 years — an article that Prime Minister Hun Sen called “distorted.”

Washington’s security establishment has long claimed China’s expansive BRI investments in ports and airfields around the globe have a strategic military component. Dubbed the “string of pearls,” the network of ports and logistics facilities, it is claimed, will allow China to project military power and secure vital sea lanes — particularly the choke points through which its energy supplies pass. A Chinese-built patrol boat at Cambodia’s Ream Naval Base: A Wall Street Journal report this week said China and Cambodia have signed a secret pact that allows Beijing to use Ream for 30 years. (Photo provided by Shaun Turton)

In its recent annual report to the U.S. Congress, the Pentagon wrote that some BRI investments “could create potential military advantages” for China, and forecast that Beijing would seek to add a second overseas base following the opening of an outpost in Djibouti in 2017 that China characterizes as a “logistics facility.”

“China will seek to establish additional military bases in countries with which it has a long-standing friendly relationship and similar strategic interests, such as Pakistan, and in which there is a precedent for hosting foreign militaries,” the report states.

Beijing has rejected the framing of its BRI program in a military context, calling it “Cold War” thinking. Instead, Chinese leaders portray the more than $1 trillion economic initiative as promoting “win-win” economic development for countries involved.

There is no question that infrastructure is in high demand in the developing world, said Carl Thayer, emeritus professor at the University of New South Wales and an expert on Southeast Asia security.

“The domestic motivations for getting ports and airfields are increased trade and increased tourism. It has deeply rooted economic reasons,” Thayer said of emerging countries. “The kind of conditions that the Asian Development Bank, World Bank and others would put down don’t exist with China. You get approval much easier and earlier.” 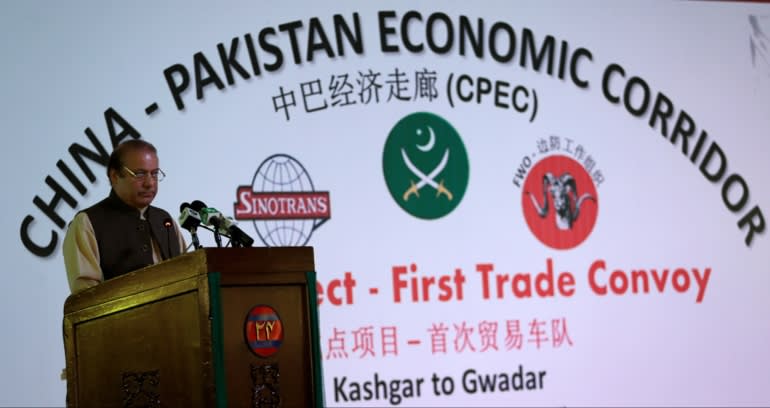 Former Pakistani Prime Minister Nawaz Sharif speaks at the inauguration of the China Pakistan Economic Corridor port in Gwadar, Pakistan, in November 2016. The site is suspected of having potential military uses.   © Reuters

But while China might overlook the human rights records of recipient countries, analysts say there are strings attached.

While there is dispute over what constitutes a “base,” the focus has centered on “dual-use” complexes — commercial ports and linked facilities that could potentially be used to support naval vessels.

According to China’s Ministry of Transport, Chinese companies have been involved in the construction or operation of at least 42 ports in 34 countries, from Europe and Africa, to the Middle East, Asia and South America. Within Asia, sites like the Port of Gwadar in Pakistan, Kyaukpyu Deep Sea Port in Myanmar, Hambantota Port in Sri Lanka and the Union Development Group (UDG) tourism development in Cambodia’s Koh Kong Province are among those suspected of having potential military uses.

These places were cited in “Harbored Ambitions,” a 2018 report by Washington-based nonprofit research group C4ADS, which looked at possible dual-use facilities that could aid Beijing’s long-range naval operations.

At a forum this month, China’s Defense Minister Wei Fenge explicitly linked deeper security ties with the BRI in an address to military leaders from the Caribbean and South Pacific. His comments came against the backdrop of increasing tension in the disputed South China Sea, where China recently launched a missile from one of its militarized artificial islands.

However, experts caution against viewing BRI investments exclusively through the lens of Chinese military strategy, saying the issue is multifaceted and includes economic and political motivators both in China and receiving countries.

“There’s definitely no smoke without fire is one way of putting it, there’s definitely potential for dual use,” said Charlie Thame, a political science lecturer at Thammasat University in Bangkok who has studied Chinese infrastructure investment in Cambodia and Myanmar.

But he added that “people tend to look at it either from a purely military strategic point of view or from a purely political or economic point of view, and often fail to provide a much more nuanced analysis of how a spectrum of different interests are motivating Chinese planners and officials to get access.” Oil and gas pipelines from Kyaukpyu in Myanmar connect China’s southwestern province of Yunnan directly with the Indian Ocean.   © Reuters

In Kyaukpyu, on the southwestern coast of Myanmar’s Rakhine State, a Chinese-led consortium is leading a $1.3 billion port and special economic zone development. The mega project is part of a broader plan known as the China-Myanmar economic corridor.

Academic Sean Turnell, a Myanmar expert and senior economic adviser to its government, said the plans “above all” serve Beijing’s strategic interests by securing a port on the Indian Ocean and access to planned energy pipelines running overland to China’s Yunnan Province.

“The whole port makes no real economic sense for Myanmar at all,” said Turnell. “It makes a lot of sense for China. This is the port that gives them absolute, unencumbered access to the flows of goods and energy above all from the Middle East, it avoids the Straits of Malacca, it’s nicely situated to irritate India, it’s of immense strategic importance.”

However, he stressed Myanmar’s domestic politics must also be taken into consideration. The original $7.3 billion Kyaukpyu project agreement, inked with the previous military junta, was renegotiated and scaled down after the 2015 election that brought Suu Kyi’s National League for Democracy and a quasi-civilian government to power.

The renegotiation, he said, was an example of “pushing back” against an arrangement that served the short-term interests of the ruling elite to the long-term detriment of the country. 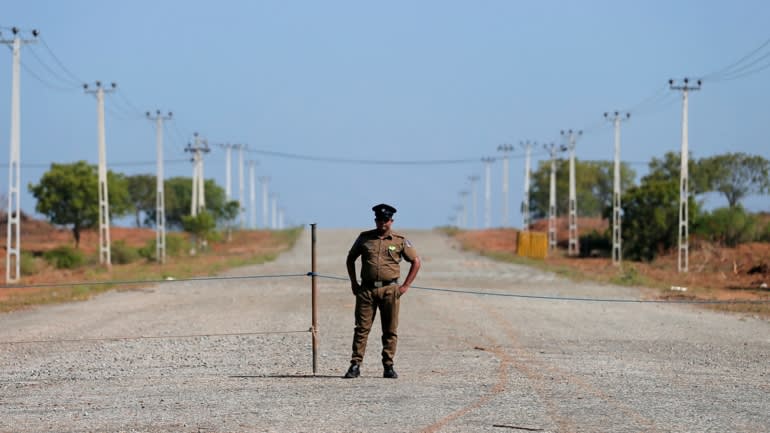 A police officer guards a $3.85 billion oil refinery project in the village of Mirijjawila in Hambantota, Sri Lanka. The Chinese-controlled port there is also seen as a potential dual-use facility.   © Reuters

“[The previous deal] was just really bad…. It was basically the same sort of story of Sri Lanka’s Hambantota Port, but much worse,” Turnell said, referring to the Chinese-built port on the South Asian island, which was leased to a Chinese company for 99 years after the country was unable to make debt repayments.

“For all the problems here, which are severe, Myanmar is the first country, I think, to successfully negotiate BRI, to push back and get something they want.”

In Cambodia, too, domestic politics provide the context for China’s unfolding BRI investments. This includes the 360 sq. km UDG development in Koh Kong, where the construction of the country’s longest airstrip and a planned deep-sea port have raised eyebrows about dual-use potential.

As billions flow into the country — stirring concerns about debt and fueling local resentment in places like Sihanoukville, the epicenter of a Chinese-led construction boom — there has been no official pushback.

In power for more than 30 years, Hun Sen has moved increasingly close to China while crushing opponents at home. While China provides a bulwark against international condemnation for Cambodia’s democratic backsliding, the massive injections of cash also grease the wheels of the country’s patronage network. The Royal Cambodian Navy coastal fleet is moored at Ream Naval Base. (Photo by Shaun Turton)

Sophal Ear, associate professor of diplomacy and world affairs at Occidental College in Los Angeles, called it a “marriage made in heaven for autocrats.”

“The win-win is really between China and Cambodia’s elites,” he said. “Infrastructure is a smoke screen for a money delivery mechanism for the elites.”

Phnom Penh’s shift in allegiances can be seen in its security relationships. In 2017, Cambodia indefinitely suspended long-running joint exercises with the U.S. Annual drills with Chinese troops, meanwhile, have expanded each year since they began in 2016.

In this sense, Ream Naval Base is a microcosm. It has long been the landing point for military assistance from the U.S. and Australia. Military delegations from Vietnam also visit the site, which hosts a Vietnamese-built hospital with a U.S.-funded medical laboratory inside.

Meters from the shoreline stand two tangerine orange U.S.-funded buildings about 75 meters apart. One serves as the tactical headquarters of Cambodia’s National Committee of Maritime Security; the other houses six rigid inflatable hull boats gifted by the U.S. 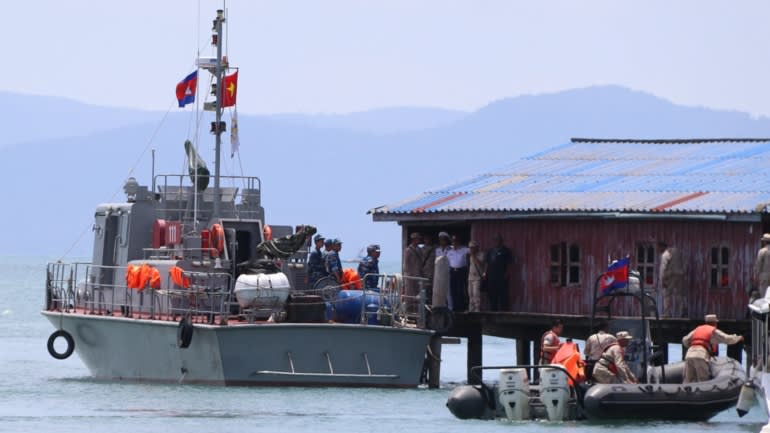 Yet speculation is swirling over the base’s future, with Joseph Felter, the U.S. deputy assistant secretary of defense for South and Southeast Asia, suggesting Cambodia’s flip-flop on a plan to upgrade the facilities could indicate an intention to host Chinese military assets.

A Cambodian Defense Ministry spokesman rejected this but acknowledged “some changes” were planned, according to Reuters.

At the base’s front gate last week, an excavator sat surrounded by mounds of rubble and gravel. Workers are currently building a new, stronger bridge across a small creek that intersects the entryway, which would allow heavy construction equipment to enter the site.

The water depth around Ream can currently only accommodate patrol vessels. Dredging would be required for larger boats to dock at any potential new wharf, including ships like the two 140-meter warships Cambodia discussed buying from China in 2016.

Potentially reshaping the region’s security landscape, the plans remain a sensitive topic in the village abutting the base, a navy-family town surrounded by the jungle of Ream National Park.

Drinking coffee at a restaurant, a naval officer who declined to give his name said discussing the future of the base was above his pay grade.