China in Djibouti: The Power of Ports

by MERCY A. KUO 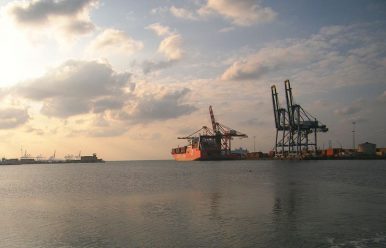 Trans-Pacific View author Mercy Kuo regularly engages subject-matter experts, policy practitioners, and strategic thinkers across the globe for their diverse insights into U.S. Asia policy. This conversation with Basil M. Karatzas – CEO of Karatzas Marine Advisors & Co., a shipping finance advisory and ship-brokerage firm based in the New York City – is the 181st in ”The Trans-Pacific View Insight Series.”

While the case is still under litigation, it is known that in February 2018, the government of Djibouti unilaterally terminated DP World’s concession to operate the Doraleh Container Terminal. At the same time, again the government of Djibouti nationalized the shares of the holding company for the Doraleh Container Terminal, in which DP World had a 33 percent stake; it is understood that China Merchants also had an unspecified minority stake in the Doraleh Container Terminal. And, upon cancelling of the concession, control has been offered to China Merchants Port Holdings to operate the terminal, for which it immediately seems to have taken an active role at expanding the port facilities not only of the container but also of dry bulk and multi-purpose terminals. A $3.5 billion free trade zone and a “global logistics hub” are envisioned under the present regime.

Enjoying this article? Click here to subscribe for full access. Just $5 a month.It appears that the government of Djibouti is the originator for these changes and switching “horses” for a port operator for part of their national port, allegedly for “irregularities” by DP World, one of the most recognizable names worldwide as port operators. China Merchants Port Holdings seems to be a mere beneficiary of the changes, and a new shareholder, with unknown stake, whether minority or majority and related terms.

From DP World’s point of view, it appears that this is solely a commercial dispute that had to end up in litigation (in the U.K. and Hong Kong) to be resolved, as they have seen their 2004-originated 25-year concession getting cancelled ahead of time over unspecified “irregularities” and their 33 percent stake in the Doraleh Container Terminal nationalized, without any compensation.

Any diplomatic, strategic, or geopolitical considerations aside, it would appear that for DP World, it’s “strictly business” and enforcing legal claims to a contract for concession.

Djibouti in the Horn of Africa is strategically situated in sea lanes between Asia-Europe trade routes. Assess China’s geopolitical intentions in expanding cover over port operations in Djibouti.

Looking at the map of east Africa and the Horn of Africa, Djibouti sits strategically between the Red Sea (think of the Suez Canal and the Mediterranean Sea) and the Gulf of Aden (think of the Arabian Sea and the Indian Ocean). For commercial purposes, its port cannot be any more strategically situated, along major trading routes to Europe, Africa, and Asia. And, competitively, it can be developed to an international transport hub bypassing the ports of Middle East altogether and any undue demands or less of a motivation to cooperate by oil rich countries.

Needless to say, this strategically located port has also tremendous importance as a military and naval location. Both the U.S. and China have military bases in Djibouti (China’s first military base overseas, to note), among other countries with naval presence there. However, recent developments indicate that U.S. naval presence is decreasing in Djibouti at a time when China seems to be ever more active, commercially, and more critically, militarily. After all, ports along a Maritime Silk Road would have little value if they cannot be consistently reliable over decades to come.

How is China expanding its influence over other key ports across the globe  ̶  Gwadar in Pakistan, Haifa in Israel, Piraeus in Greece, etc.?

China’s strategy of a “Belt and Road Initiative” (BRI) is based squarely on access to strategic natural and physical assets worldwide, whether such assets are commodities (i.e. oil deposits, etc.), infrastructure to access to such assets (i.e. pipelines, etc.), and more critically, port infrastructure. Port infrastructure is critical not only for China to ship commodities smoothly back home, but also ensuring that exports from China can uninhibitedly reach consumer markets worldwide.  A port is made strategic not only by the markets that it can have access to but also by the sea lanes that can be reached, of both commercial and naval importance.

Although there have been reports of occasional hiccups with certain ports, such as at the Port of Gwadar in Pakistan recently, China – as per established patient approach, historically – keeps chipping away at the target by investing, progressing, and slowly settling new milestones. One can take an example from the Port of Piraeus in Greece, whereby notoriously Greek bureaucracy seems to move a tad faster when the Chinese are involved, and the port has been reporting increasing throughput volumes (at a time when many other European ports report decreasing volumes), and rumored plans for expansion of the port to include cruise ships and ship services like drydocking and repairs. Accessing a country in distress (Greece) via its most precious shipping industry has been a strategic linchpin, and this is before the benefits of the so-called “Golden Visa” for Chinese nationals once they invest 300,000 euros in distressed real estate in Athens, in the EU’s own backyard.

With the United States reducing its presence in Africa, what are the policy implications of China’s rising role in Africa’s shipping and port development?

There have been extensive reports in the press whereby countries, such as Argentina, felt “overwhelmed” with China’s allegedly strong-arm policies and demands as part of extending financing, and they had planned a strategy shift toward the U.S. and the West. The election of Trump in the U.S. and his “America first” policy has made any shift by many of these countries away from China’s emerging sphere of influence questionable. It has been reported that Argentina’s new government has been moving aggressively to court additional investments and exports (i.e. soybeans) from China.

Africa, a resources-rich but capital-poor continent, is in need not only of heavy investment for development and infrastructure but also support to policies that will soon pull it to the ranks of the developed world. America’s shifting geopolitical priorities will push the hand of many countries in the African continent to seek investments and support from whoever is willing to provide such, possibly at the risk of compromising Western values and influence.

At the time of this interview, it was announced that Italy, a founding member of the European Union and member country of the G-7 Group, has just signed multibillion dollar projects related to “port, infrastructure and maritime transport”; if supposedly developed Western countries like Italy and Greece find Chinese financing and business prospects as appealing, African countries will likely have fewer attachments to the West for diplomatic “repositioning.”