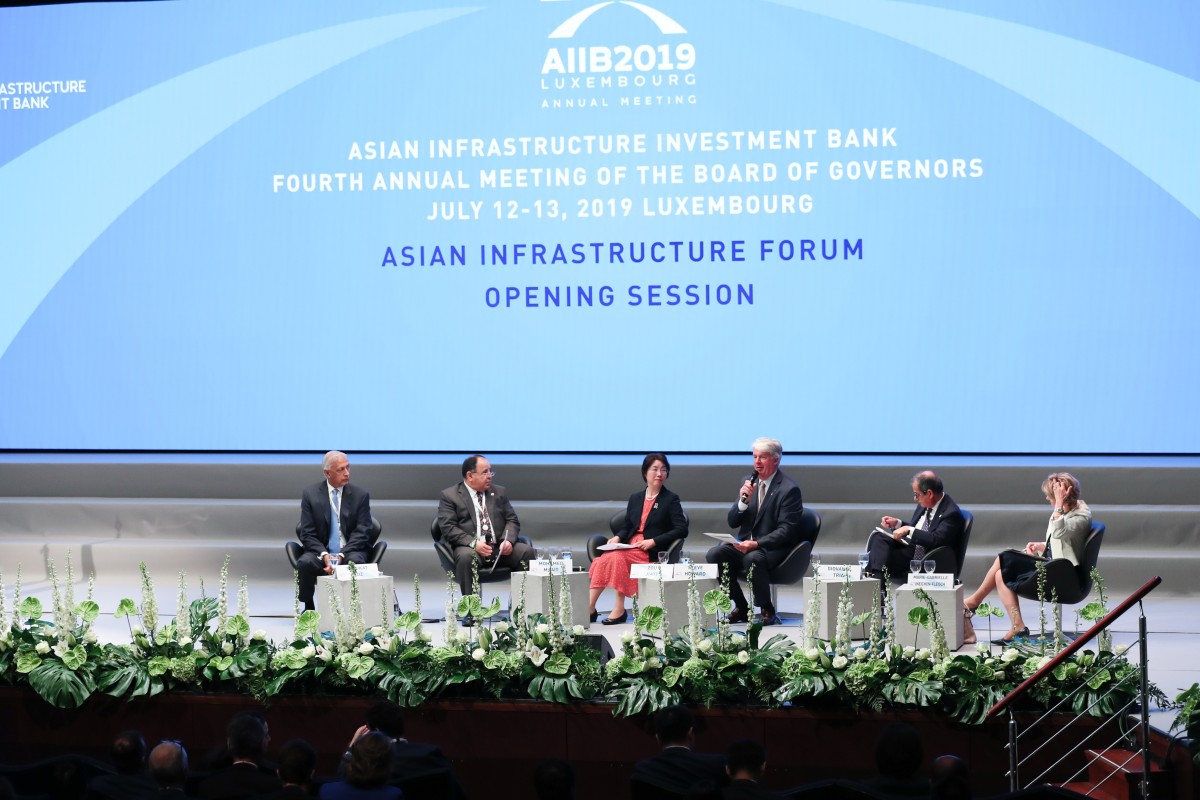 It was the first time the bank had held the two-day gathering outside Asia since it was founded at the end of 2015, as it seeks to position itself in the global financing landscape. Photo: Xinhua

The Asian Infrastructure Investment Bank has expanded its membership to 100, with Benin, Djibouti and Rwanda the latest countries to join the Beijing-led multilateral lender.

The addition of the three African countries was announced at the bank’s annual meeting in Luxembourg on Saturday. It was the first time the bank had held the two-day

since it was founded at the end of 2015, as it seeks to position itself in the global financing landscape.

While the Beijing-based lender is still some way off the size of the World Bank – which has 189 members and has always been headed by an American – it is larger than the Manila-based Asian Development Bank (ADB), with 68 members.

“We now have members on every continent,” said Danny Alexander, The Asian Infrastructure Investment Bank (AIIB) vice-president and former chief secretary of the British Treasury. The development of the AIIB is widely seen as a diplomatic win for China, which holds the largest voting rights in the bank with a stake of slightly less than a third. The United States, which is not a member, sees the bank as a tool for Beijing’s geopolitical aspirations, but China has successfully persuaded Washington’s key allies – including Britain – to join the lender.

Alicia Garcia-Herrero, chief economist for the Asia-Pacific at Natixis, said the AIIB was an agency promoting China’s interests, just as the World Bank and International Monetary Fund had long promoted US interests – but with an important difference.

“The US did not have enough of a shareholder share to fully dominate the World Bank and [International Monetary Fund], which is a mistake China has not fallen into with the AIIB,” said Garcia-Herrero, who is also an adviser to the ADB.
“The fact that the US has not gotten into the AIIB only helps China control the AIIB even more tightly – in that regard, the US decision is a mistake.”
By the end of last year, the bank, with a stated capital base of US$100 billion, had granted US$7.5 billion worth of loans for 35 infrastructure projects in 13 countries, including Indonesia, India, Pakistan, Turkey and Egypt.

The potential for infrastructure financing is huge. A 2010 report by the ADB estimated that Asia alone would need US$8 trillion to build infrastructure for the region’s development before 2020.

But Beijing has played down the bank’s role in China’s economic diplomacy, positioning the AIIB as a new multilateral lender that follows international standards on the environment and sustainability.

Last month, the bank said it would launch local currency financing in emerging markets such as India and Indonesia.

However, the AIIB’s relationship with Beijing continues to come under scrutiny at a time when China’s influence is expanding in countries such as Djibouti, one of the new members. The country, located in the Horn of Africa, is home to China’s first overseas military base, while most of its 14 major infrastructure projects are being financed by Chinese banks, according to a research report published by the Begin-Sadat Centre for Strategic Studies, an Israeli think tank.

The AIIB reiterated that it invested in high-quality sustainable projects and was aware of the risks faced by smaller economies as their debt-to-GDP ratios rose as a result of infrastructure developments.

“New infrastructure investments must increase a country’s capacity to service debts, not just have debts to service,” said Laurel Ostfield, the AIIB’s director general of communications.

She added that the bank did not intend to challenge or replace other international finance institutions but to work with them.

“From the outset we have worked very cooperatively and collaboratively with the other multilateral development banks,” Ostfield said.

According to the AIIB, 60 per cent of its loans were granted in partnership with other established multilateral financial institutions like the World Bank and European Investment Bank.

Stephen Olson, a research fellow at the Hinrinch Foundation, a non-profit promoting sustainable global trade, also said that the AIIB should not be seen as competing with existing organisations such as the World Bank and the IMF.

He said the AIIB’s development was a broader reflection of how the world had changed since those institutions were established more than 70 years ago.

“This is more reflective of the fact that existing multilateral institutions were set up when China didn’t have a seat at the table,” Olson said. “I wouldn’t see it as being competing or adversarial.”