Reforms adopted by Ethiopia’s new Prime Minister Abiy Ahmed have challenged the status quo – politically and economically. They come as inter-ethnic violence is intensifying throughout the country.

Today almost three million people have been internally displaced. Two-thirds of them have fled the conflict; the others, drought, and floods. Nearly eight million people are in need of emergency food assistance.

Qoloji is the biggest camp for internally displaced people in the Somali regional state, in the east of Ethiopia. The camp hosts 80,000 people, mostly from the Somali ethnic community and from the nearby Ethiopian Oromia region. New families arrive every day, but many of them have been here for over a year. 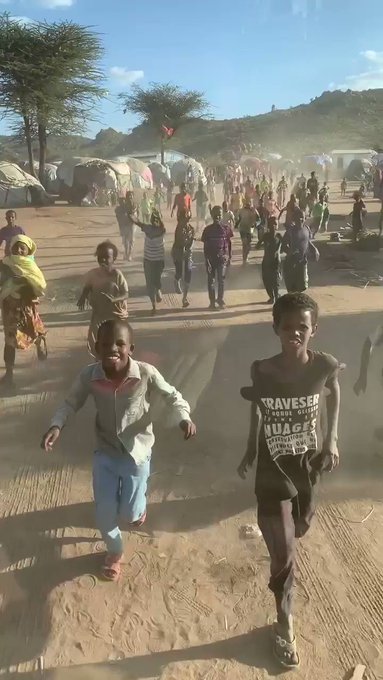 “I came here one year and three months ago

. I had two shops in Oromia, I was selling food and clothes. When we came here, we started living in a little hut, we are suffering a lot.”

Water and sanitation are among the most urgent needs in the camp. The United Nation’s agency IOM (International Organization for Migration), financed by EU Humanitarian Aid, has built latrines and showers and is working on raising hygiene awareness.

“We have trained 16 hygiene promoters. We’ve selected them from the IDPs themselves. Each hygiene promoter will train 30 women. They teach prevention and after they finish this session they will follow up the women house to house” Halimo Hassen, IOM

These basic rules save lives. Each week IOM operators go door to door to check how the training is being put into practice. Ubah showed us how she has started separating drinkable from non-drinkable water in the two jerrycans.

Ubah Ali Esse, an internally displaced, speaks about the hygiene awareness training, he has received.

Christos Stylianides, the European Commissioner for Humanitarian Aid visited the Qoloji camp last December. He announced 89 million euros in humanitarian support to be sent in 2018-2019. These funds will be used to address the needs of displaced people, and also to assist one million refugees, as well as to tackle natural disasters.

There are 600 sites for internally displaced people in Ethiopia. Most of them are not camps. In the village of Deder (Oromia region) where 8,000 displaced people are living, either mixed in with the local population or in administration buildings that have been emptied for use in response to the emergency.

“Our numbers are increasing; 150 children were born here. We are sleeping on a cement floor; we have no clothes. Our needs are increasing, but what we are receiving is very limited.”

The task of understanding the number of internally displaced people, as well as their ages, movements and living conditions is a major responsibility. IOM has deployed a network of operators to collect data which is entered into a so-called “Displacement Tracking Matrix”.

Communications Officer Dario Poddighe describes the benefits of the store:

“The database contains information about the basic needs of the displaced population, which makes it easier to coordinate the intervention of NGOs and UN agencies, as well as of the government. This translates into providing aid more efficiently.”

The government is cooperating with international agencies, who are, nonetheless, asking for an independent assessment of the needs in sensitive areas and to avoid people being pressured into returning to unsafe zones.