The start of 2019 has seen a flurry of political activity from Mali to Madagascar, with a shock opposition victory in Africa’s biggest country, protests against long-serving rulers, a short-lived coup and agitation stirred by economic mismanagement all suggesting this will be a year to watch on the continent.

South Africa and Nigeria, the continent’s two biggest economies, are among more than 20 African nations that will hold elections this year. Voting takes place against a backdrop of growing discontent among the young over faltering job and educational opportunities in countries long dominated by strongmen. China, Russia and Islamist militants add a layer of unpredictability as they jostle for influence at a time when the U.S. is turning inward. 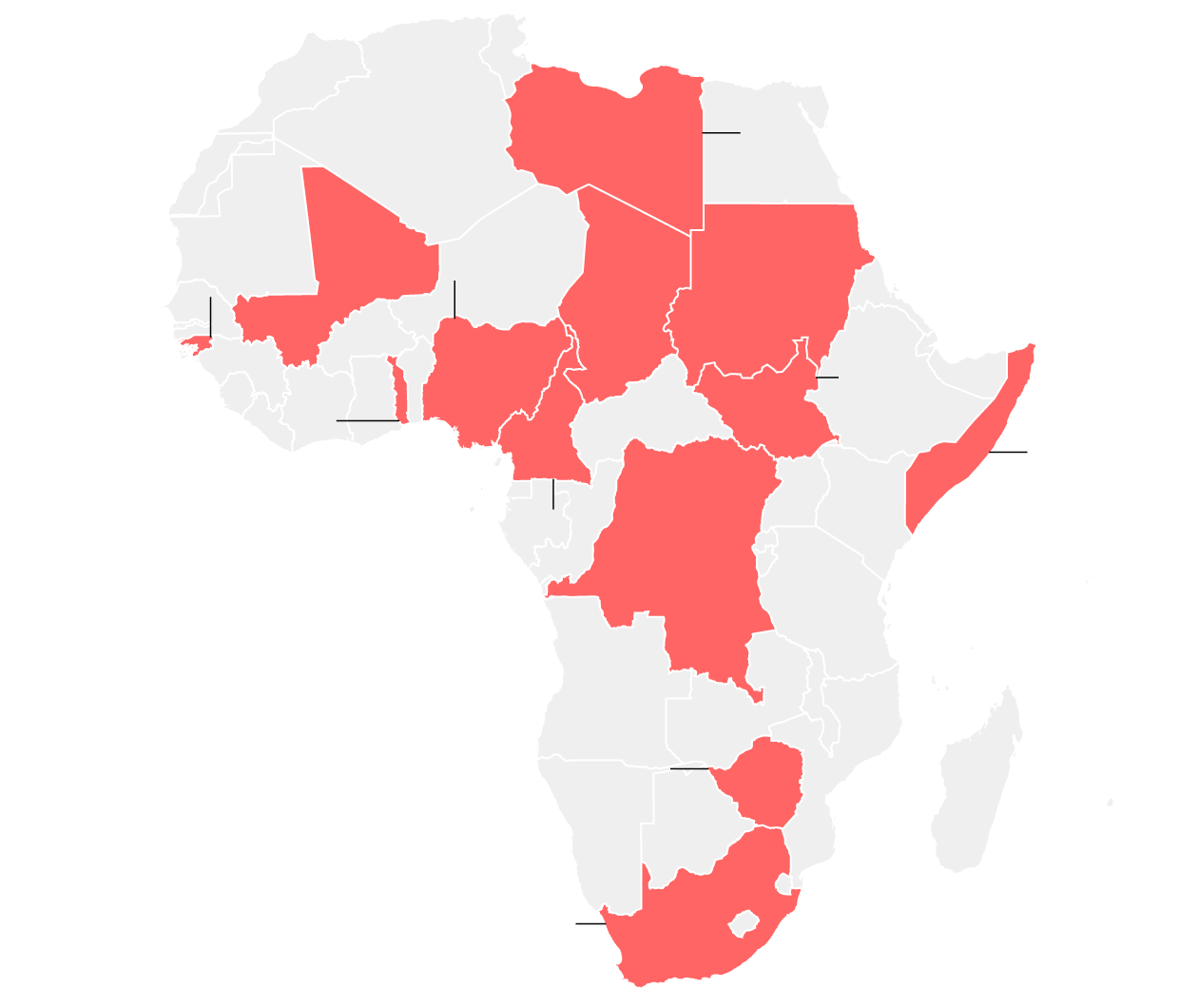 One of the continent’s brightest spots is Ethiopia, whose 42-year-old prime minister, Abiy Ahmed, is pursuing change at a breathtaking pace and overseeing Africa’s fastest-growing economy. Since taking power last year, Abiy has sought to establish a multi-party democracy in a nation that’s been under the iron rule of the Ethiopian People’s Revolutionary Democratic Front for a quarter-century. The jury is out on whether he can see it through.

Following is a country-by-country guide to the issues — and opportunities — across Africa for investors this year:

The risk of widespread political unrest in the Democratic Republic of Congo receded after electoral authorities announced that opposition leader Felix Tshisekedi won last month’s presidential elections. Tension had been building in sub-Saharan Africa’s largest nation and the world’s biggest cobalt producer after an earlier postponement of results from the Dec. 30 vote that was more than two years overdue. There’s still a danger of protests from supporters of another opposition candidate, Martin Fayulu, who called the result “electoral fraud.” If confirmed by the Constitutional Court, the outcome will bring to a close Joseph Kabila’s 18-year rule and, just possibly, mark the first democratic transition since independence from Belgium in 1960.

Africa’s most populous nation is bracing for another round of general elections that have traditionally been marred by violence and rigging. Presidential and parliamentary votes are taking placed under the shadow of a devastating war against Islamist militants in the northeast, clashes between farmers and herders that have been claimed thousands of lives, and a moribund economy. The presidential race in OPEC’s sixth-biggest oil producer is proving to be a hard-fought battle between the incumbent, former military strongman Muhammadu Buhari, 76, and Atiku Abubakar, a 72-year-old businessman who served as vice president from 1999 to 2007.

Sudan entered the new year with unprecedented protests over soaring living costs that are posing one of the greatest challenges to President Omar al-Bashir since he came to power in a 1989 Islamist-backed coup. Al-Bashir, who’s quelled several internal rebellions and been indicted by the International Criminal Court for alleged war crimes, is now facing an existential challenge much closer to home in the shape of unrest that’s left dozens of casualties.

Africa’s newest nation is emerging, tentatively, from a conflict that at its height rivaled Syria for the dubious title of the world’s worst conflict, claiming almost 400,000 lives. The country, which split from Sudan in 2011, has witnessed false dawns before, and its pillaged towns and villages show the scale of the challenge in rebuilding even a country endowed with sub-Saharan Africa’s third-biggest oil reserves.

Twin explosions that killed at least 30 people near the presidential palace in the Somali capital, Mogadishu, at the close of 2018 served as a reminder of the threat al-Qaeda-linked militants pose to the Horn of Africa country. The insurgents remain the biggest source of insecurity in Somalia, despite continuing operations to degrade it, including U.S. airstrikes that are intensifying under President Donald Trump’s administration.

A violent rebellion in Cameroon’s two Anglophone regions is increasingly affecting the country’s much larger French-speaking area, which registered its first attack late last year and is sheltering thousands of people who’ve been forced to flee their homes in the Northwest and Southwest regions. A disarmament program recently announced by longtime President Paul Biya has yet to yield results. Biya has vowed to quash those who refuse to put down their weapons in 2019.

An Islamist insurgency that began in northern Mali seven years ago and has reverberated across West Africa shows no signs of abating. The deployment of more than 15,000 United Nations peacekeepers and 4,000 French troops has failed to stop militant attacks from spreading to neighboring Burkina Faso. At the same time, both nations are facing a surge in inter-communal violence in impoverished rural areas that, as in Nigeria, pits farming communities against ethnic Fulani herders.

Chad has deployed troops and military aircraft near its northern border with Libya following a deadly attack last year on army positions claimed by rebels called the Military Command Council for the Salvation of the Republic, or CCSMR. While few details have trickled out about the group, it’s widely believed to be supported by Libyan fighters. The government of the oil-producing nation has also been bogged down by weeks of public-worker strikes amid an economic crisis.

After eight years of turmoil, Libya was offered some hope when the main rival leaders — Fayez al Serraj, whose internationally recognized government is based in the west, and Field Marshall Khalifa Haftar in the east — agreed to cease hostilities and call elections early this year. But the holder of Africa’s largest proven reserves of crude remains deeply divided, and disputed vote results could spark more chaos and embolden Islamic State’s bid to carve out a base in Libya. That would affect regional security and increase migrant flows to Europe. In an added complication, Russia has been expanding its presence in Libya and is lobbying for the return of Saif al-Islam Qaddafi, the late dictator’s son, as a possible next ruler.

Labor unrest is mounting as the southern African nation endures its worse economic crisis in at least a decade, with fuel, food, medicines and foreign exchange all in short supply. Doctors have gone on strike, demanding that their salaries be paid in hard currency instead of via electronic transfers, and teachers have threatened to take similar action. Political tensions also continue to simmer, with the government and opposition still at loggerheads over last year’s disputed election.

A political feud in the sleepy capital of Guinea-Bissau is threatening to push one of the world’s poorest countries back to being a haven for gangs smuggling cocaine into Europe and open the door to Islamist militants. The dispute between President Jose Mario Vaz with his party, known as PAIGC, over delayed elections is stoking anger among young people dissatisfied with faltering job and educational opportunities.

Negotiations about planned constitutional changes with Togo’s largest opposition parties are at an impasse, and mass protests against the regime of President Faure Gnassingbe are likely to continue into 2019. Gnassingbe has been in power since winning disputed elections in 2005 that were held shortly after the death in office of his father, Gnassingbe Eyadema, who ruled Togo for 38 years.