Will countries heed the AU Peace and Security Council’s concerns about foreign military bases on the continent?

Africa is host to a rising number of foreign military operations and bases, largely due to bilateral agreements between some African Union (AU) member states and foreign powers. This is despite the AU Peace and Security Council’s concerns about foreign military bases on the continent and the establishment of new ones.

In April 2016, the council called on member states to be ‘circumspect’ when ‘entering into agreements’ that would lead to the establishment of foreign military bases in their countries. Foreign military presence is indicative of gaps in Africa’s responses to prevailing peace and security challenges, especially threats originating from terrorist groups and maritime piracy.

Of the 13 countries with a known presence in Africa, the United States (US) and France have the most troops on 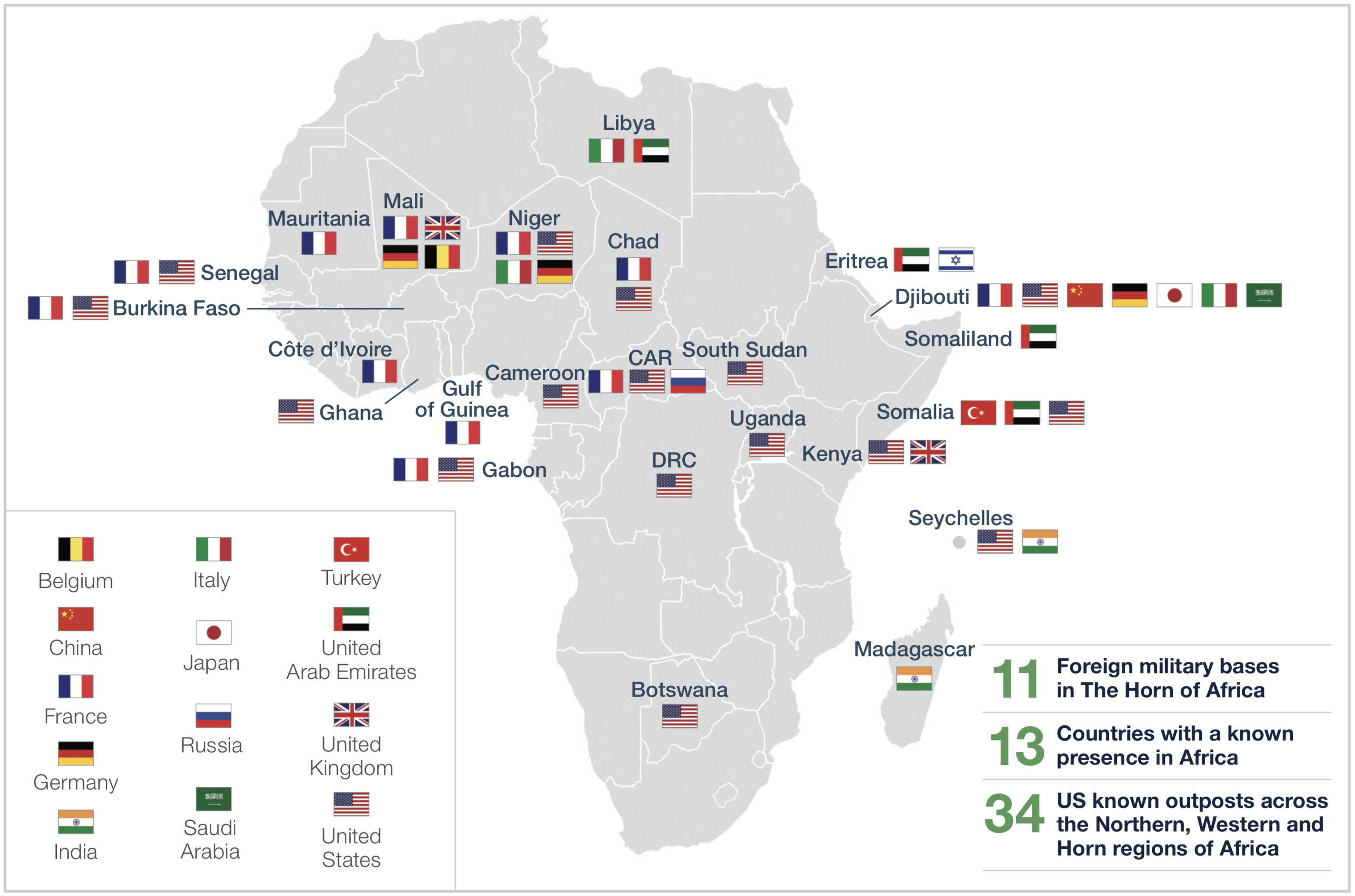 The Horn of Africa has become the epicentre of this presence, with about 11 foreign military bases. This is largely due to the region’s strategic proximity to the Middle East and Asia and the subsequent threats along the Red Sea.

From their outposts across Africa, foreign militaries focus primarily on protecting their interests, securing friendly regimes, projecting their influence amid rising competition among global powers, and countering threats to international peace and security, particularly those posed by terror groups and pirates.

The gaps in Africa’s responses to its peace and security challenges are because of the continent’s inability to swiftly operationalise the African Peace and Security Architecture, particularly its African Standby Force component, which would help contain crises.

Foreign military presence in Africa is also driven by AU member states leasing their territories to foreign powers for military bases, mainly for domestic economic gain. This is also sometimes driven by member states seeking external help in dealing with serious security challenges. Djibouti generates more than US$300 million annually from the foreign military presence on its soil.

Other AU member states, such as former French colonies, have been hosting French military bases as a result of bilateral military agreements signed after independence. Ensuring regime security for the incumbent government and securing French economic interests in the host country and the region are the principal motives for such arrangements.

Arguably, successful US drone attacks in Somalia have helped reduce al-Shabaab’s spoiler capacity in efforts towards peace. Similarly, French troops have contributed significantly in building the capacity of national armies in the Sahel and driving out jihadists from northern Mali.

However there is also a downside to this foreign military presence. First, the competition among the various foreign militaries to influence responses to challenges in Africa’s hotspots has led to a multiplicity of activities that overcrowd the security landscape, especially in the Sahel and the Horn of Africa. Examples are the emergence of ad hoc regional response structures such as the Joint Force of the Group of Five of the Sahel (G5 Sahel) and the Multinational Joint Task Force.

Rivalry between the US and China is playing out in Djibouti

Such regional responses emerge from the willingness of some African states to address certain security challenges outside the framework of the regional economic communities, with foreign military support. The G5 Sahel is considered by many as France’s exit strategy from the Sahel. Responses such as the G5 Sahel have lessened the urgency to operationalise regional security structures.

This has not just exported the tensions in the East China Sea to Africa but has also made Africa practically complicit in the actions of its guests elsewhere. The latter is evident from the role of Djibouti as a base for US drone operations in Somalia and Yemen, as well as the United Arab Emirates’ use of the Assab base in Eritrea for operations in Yemen.

Also important is the potentially destabilising impact that growing competition among major global powers may have on the continent. Rivalry between the US and China is playing out in Djibouti. Apart from turning Africa into a proxy turf for extra-regional competition, the risks of such tensions escalating are high. In such situations the host member state and Africa in general are set to house the showdown and will be on the receiving end of the ensuing destruction.

Apart from the risks associated with foreign military presence and the AU’s call for member states to be circumspect in their dealings, there is also no established continental consensus on the modalities for regulating bilateral initiatives that result in bases being established.

The AU’s request for circumspection on the part of member states is necessary to inform urgent continental action against the increasing number of military bases. Apart from the highlighted risks, the need for urgency stems from the self-justifying nature of foreign military presence, in the long term.

The US, for example, has numerous military outposts in Africa from where it conducts drone operations, training, military exercises, direct action and humanitarian activities. The associated infrastructure, support systems and military personnel for these operations have amounted to significant American interest in Africa.

The US military justifies its presence in Africa with its need to protect those interests, despite the risks to host countries. Such reinforcement won’t allow for any significant downscaling of military presence in the near future, regardless of the gains made in fighting terrorism.

Owing to the sensitive nature of the situation and the extensive presence of certain powers already on the continent, discussions about the future of foreign military presence require objectivity – not just for African member states but for all actors who either have significant presence on the continent or are currently scrambling for one.