Europe must develop a Middle East policy independent of the US

Men walk amid rubble of destroyed building in Tadamun neighbourhood near the Palestinian Yarmuk camp in the south of the Syrian capital of Damascus on November 3, 2018. (Photo by LOUAI BESHARA / AFP)

The contest over the nature and future of the regional order, and the Middle East’s relations with the international system, is far from over – and Europe needs to develop its own policy

Russian President Vladimir Putin has repeatedly called on Europe to take part in the reconstruction of Syria – in essence, a nice way of asking Europeans to foot the bill for the destruction and chaos that Russia, and particularly its client the Assad regime, have caused.

Likewise, the US has traditionally asked Europe to shoulder its fair share when it comes to security and foreign policy – President Donald Trump even expressed this demand in an undiplomatic way.

Middle Eastern states and civil society organisations also frequently urge the Europeans to engage more with the region, but for different purposes. It is an irony of history that Europe, which played the primary role in creating the modern Middle East, now comes across as an impotent power in the face of dramatically changing regional geopolitics.

Given current trends, however, impotency isn’t something that European powers can afford in their foreign policies towards the Middle East and North Africa region. For better or for worse, Europe and the Middle East will mutually shape each other.

Since the Suez crisis of 1956, in which the US publicly forced former colonial powers, Britain and France, to succumb to its will, Europe’s foreign and security policy towards the region has become largely US-centric – but such dependence on the US is no longer feasible when it comes to Middle Eastern issues.

Not only is the US no longer interested in playing its traditional role vis-a-vis regional security, but its declared policies are clearly undermining European interests.

The loss of a US-centred framework should engender a real debate among pundits in Europe on the ideal framework for European foreign, security and defence policy

The US withdrawal from the Iran nuclear deal – along with its unilateral recognition of Jerusalem as Israel’s capital, uncritical support of Saudi Arabia and the UAE in their catastrophic war in Yemen, and hasty decisions about military withdrawal from Syria – have all contrasted with Europe’s declared positions, undermining its interests and security.

The loss of a US-centred framework should engender a real debate among pundits in Europe on the ideal framework for European foreign, security and defence policy, particularly concerning the Middle East.

Across the region militarisation is taking place at multiple levels. Armed non-state actors and militias are increasingly accessing weapons easily, including sophisticated ones with powerful capabilities, while the arms race among regional powers is continuing at a staggering pace.

The Gulf in particular has become awash with all types of weapons; it is arguably the most profitable place for weapons and the arms industry worldwide. Weapons are increasingly being purchased in an unconditional manner and from different sources. This paves the way for disastrous results, as is evident in the catastrophic Saudi-UAE war in Yemen.

The region has also become peppered with foreign military bases. On top of the traditional presence of Western military actors, Russia, China and India are enlarging their military footprints in the greater Middle East region. Capitalising on its Syria campaign, Russia is eyeing a bigger share of the regional arms market and a larger military presence, be it in Syria, Egypt or Libya. 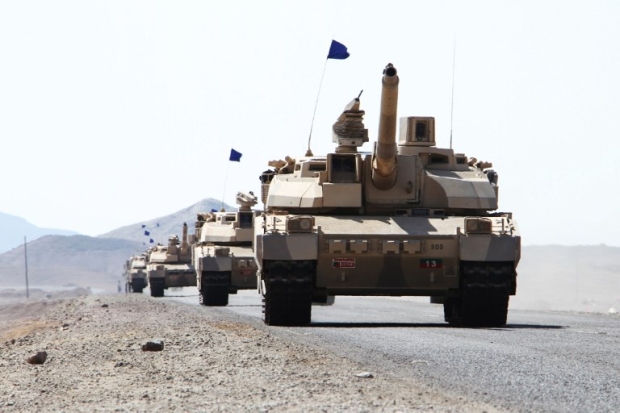 Tanks of the Saudi-led coalition are deployed in the coastal district of Dhubab, Yemen, on 7 January 2017 (AFP)

Russia is currently assertive on both the eastern and southern borders of Europe; thus, Europe needs to devise a foreign and security policy that takes into account the interconnectedness of its security challenges. China’s naval bases in Gwadar in Pakistan and Djibouti on the Red Sea are also likely to have implications for regional security.

Following the same trend and reflecting the Sino-Indian geopolitical rivalry in the Indian Ocean, India last year signed a defence cooperation agreement with Oman, allowing the Indian navy to use Oman’s port of Duqm. Regional powers are also increasingly setting up their own military bases in the region: Turkey’s bases in Somalia and Qatar, and the UAE’s in Somaliland, Eritrea and Yemen, are reflective of this trend.

The contemporary Middle East is no longer the geopolitically US-centric space that the Europeans once knew. Europe can respond in several ways: proceed with its largely ad-hoc, incoherent and crisis-driven policies of recent years; continue to be incorporated into someone else’s game plan, as with the French-German involvement in the Russian-led Astana process for Syria; or craft a more coherent policy towards the region, with a strong emphasis on democratisation, reform, good governance, inclusion and reconciliation.

As the contest over the future of Middle East continues at full steam, Europe needs to devise a more long-term, values-informed foreign policy towards the region.

On one hand, the persistence of authoritarian regimes – with all their attendant brutality, illegitimacy and inefficacy – makes many believe that not much has changed in the region’s politics and power structure.

Yet, a closer examination shows the region has undergone a profound and irreversible transformation. Regional authoritarianism is on much shakier ground today than in the past, and not because these regimes are lacking the means or the will to suppress public dissent.

Rather, it is a transformation in the political psychology of the people that makes the future of these authoritarian regimes uncertain. Despite their utmost brutality, these regimes cannot acquire people’s consent to their rule, rendering the autocrats more paranoid and their longevity in doubt.

Egypt’s recent ban on yellow vests in the aftermath of the French protests clearly demonstrates how paranoid and insecure the Sisi regime has become.

The contest over the nature and future of the regional order, and the Middle East’s relations with the international system, is far from over – and Europe shouldn’t be a bystander. The outcome of this contest will have a significant impact not only on Europe-Middle East relations, but also on domestic politics in European countries.

Not only European action, but also European inaction, will have major results on both shores of the Mediterranean

If Europe doesn’t engage and invest in the transformation of the Middle East, regional developments will dramatically transform it, whether through radicalism, refugees, terrorism, xenophobia or populism. Interactions between Europe and the Middle East will be transformative, for better or for worse.

Not only European action, but also European inaction, will have major results on both shores of the Mediterranean. The need for a debate on the framework, instruments and objectives of a European policy towards the Middle East is more urgent than ever.