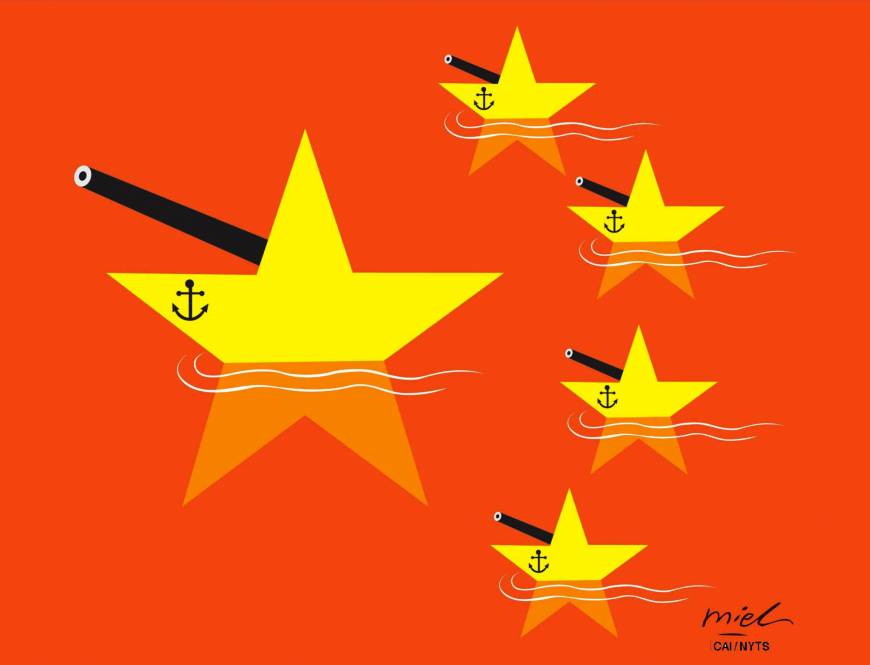 I wrote a column recently about how a longstanding assumption of America’s China policy — that economic integration between the two countries is an unalloyed good — has now been overtaken by events. But this isn’t the only area in which China’s rise is forcing a re-evaluation of old beliefs.

Now I’ll delve into another issue with enormous implications for U.S.-China relations and American interests: the rise of China as a more globally oriented military power.

For years, most experts believed that China’s military challenge to the United States was regional in nature — that it was confined to the Western Pacific. After decades of tacitly free-riding on America’s global power-projection capabilities, however, Beijing now is seeking the capabilities that will allow it to project its own military power well outside its regional neighborhood.

The fact that China is building up its military strength is hardly news, of course. The 1995-96 Taiwan crisis, during which the U.S. responded to Chinese intimidation of Taiwan by sending two carrier strike groups to the area, underscored to the Chinese leadership that America’s military dominance gave it the capability to intervene at will even in China’s own backyard.

Since then, Beijing has been developing the capabilities — advanced fighter jets, anti-ship ballistic missiles, and stealthy diesel-electric attack submarines among them — meant not just to give it leverage over its East and Southeast Asian neighbors, but also to prevent the U.S. from intervening effectively in their defense.

This effort to build what are known as “anti-access/area-denial” capabilities has borne fruit, and the U.S. will now face high and continually growing obstacles to defending Taiwan or other partners and allies in the event of conflict with China.

Even as Beijing challenged U.S. dominance in the Western Pacific, however, it was simultaneously one of the greatest beneficiaries of America’s global military superiority.

U.S. power-projection capabilities have underpinned the stability and freedom of the global commons and ensured the free flow of energy supplies and other key commodities. U.S. military power has thus fostered the relatively benign global climate in which China has grown rich and powerful.

This is just one of the many paradoxes of the U.S.-China relationship. Washington has underwritten the economic rise of its greatest long-term strategic rival by protecting the global commercial flows that have made that rival so wealthy. China, for its part, has been a free-rider on America’s provision of global stability even while challenging the U.S. ever more sharply in the Asia-Pacific.

This situation could not last forever, though, because it represented a vulnerability that a rising China would not tolerate indefinitely. After all, if the U.S. can secure the global commons, then it can also dominate and even restrict access to them if it so chooses.

So, as the U.S.-China relationship has become more contentious, China has become less willing to accept that its economic prosperity requires the forbearance of the U.S. Navy. Chinese strategists have become acutely aware of the “Malacca Dilemma” — the prospect that the U.S. could severely constrain China’s imports of oil and other critical commodities by interdicting shipping at a few crucial maritime chokepoints.

U.S. strategists are also fully aware of this possibility, as proposals for a far-seas blockade meant to starve Beijing of vital resources have figured prominently in the debate on how to defeat China in a possible war. Any great power would chafe at a situation in which its foremost rival has such enormous power over its own economic well-being, and China is no exception.

At the same time, the growth of Chinese military strength is giving Beijing greater ability to start redressing this vulnerability. In the mid-1990s, the People’s Liberation Army was still an antiquated force that would have faced enormous difficulty projecting power anywhere beyond China’s borders. Chinese defense spending amounted to only around 2 percent of the global total.

Now, after decades of rapid economic growth and steadily rising defense spending, China has the second-largest defense budget in the world, and the PLA is a more sophisticated, modern force capable of taking on ever-more ambitious missions.

As a result, Chinese military officials are looking beyond the Western Pacific and considering how to project power ever farther abroad.

Naval strategists are thinking about how to exert Chinese military influence in the Indian Ocean, the Horn of Africa and other critical waterways that represent China’s maritime lifelines to key regions such as Persian Gulf. The Belt and Road Initiative, a vast trade and infrastructure project meant to link China with countries throughout Asia and Europe, serves a similar purpose.

And even though China’s force posture is still focused on the country’s maritime and territorial peripheries (as well as on internal security), Beijing is gradually building a more global military footprint. Chinese forces have carried out counter-piracy missions, crisis evacuations and naval exercises thousands of miles from China’s coast. They have ventured into the Arctic Ocean, Baltic Sea and other faraway waterways. The PLA Navy is developing capabilities, such as aircraft carriers, that may eventually provide some type of global power-projection capability.

China is also working to secure the logistical facilities necessary to sustain such operations. Beijing has opened its first overseas military base in strategically located Djibouti, among other developments elsewhere along the Indian Ocean littoral, and it is reportedly using economic leverage and coercive diplomacy to seek access to ports and other facilities in countries from Vanuatu to Sri Lanka and beyond.

Additionally, Chinese forces have engaged in exercises in Africa, as part of an effort to protect China’s growing overseas presence in that continent. This more global outlook is even evident in pop culture. A blockbuster movie recently depicted a Chinese battleship rescuing overseas Chinese from the chaos of a civil war in a fictional African country.

It will be decades, at earliest, before China can even come close to equaling the global military reach of the U.S. But Beijing is moving, clearly and deliberately, in that direction.

From an American perspective, this trend is troubling for what it says about China’s long-range ambitions. It shows that, at a time when U.S.-China relations are becoming increasingly antagonistic, Beijing is already looking ahead to a period when it will compete with America not just regionally but globally as well.

And if China is aspiring to a more global presence now, at a time when the areas just off its coast are still heavily contested, how ambitious might it become if and when it succeeds in establishing itself as the dominant power in the Western Pacific?

This is just one of several ways in which Beijing is steadily taking on more of the trappings of an aspiring global power, one whose objectives and interests expand with its capabilities.

The silver lining is that China may be getting ahead of itself. Its efforts to develop a larger overseas footprint — particularly to secure access to ports and other facilities — have created greater international suspicion of its motives and designs. That, in turn, will probably lead to more international resistance to China’s strategic rise.

Moreover, if one assumes that Chinese military spending is not infinitely expandable, then there is a tradeoff between developing power-projection capabilities that may be useful in a global context — a carrier strike group, for instance — and those that would provide the greatest bang for the buck in a war against the U.S. over Taiwan, such as anti-ship missiles.

Global powers are continually confronted with hard decisions about resources and priorities. China will become more familiar with such predicaments as its ambitions grow.

Why landlocked Ethiopia wants to launch a navy